HRC and Rachel Maddow Call Out NOM for Faked Photos 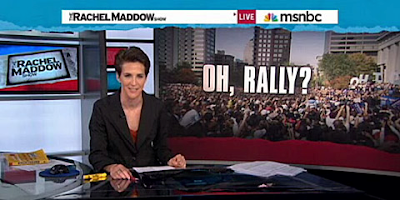 I wrote yesterday about the story broken by fellow Blogger Summit attendee, Jeremy Hooper of Good As You, who caught the ever dishonest National Association for Marriage ("NOM") photo shopping Obama rally pictures to give the utterly false impression that NOM has large, wide spread support for its anti-gay jihad. Hopefully, the expose will go viral now that Rachel Maddow did a segment on NOM's dishonesty which can be viewed here. To further ratchet up scrutiny of NOM's sleazy practices, HRC has released a letter condemning NOM's dishonesty. Here's the text of the letter to NOM which was disseminated via press release:

Your organization has sunk to a new level of deception by manipulating photographs from an Obama campaign event in Ohio to trick Granite Staters into believing support for the National Organization for Marriage is much greater than it really is. And while I know that NOM has never been above misleading the public to further its cause, this new phoniness is an example of just how far you will go to make people believe your pursuit - the denial of equal treatment under the law -- is supported by New Hampshire voters and Americans in general.

There's no mistaking the facts: 62 percent of Granite Staters oppose repealing marriage equality. In addition, polls reflect that a majority of Americans support marriage equality nationwide. And it's no secret that support is growing as Americans from all walks of life come to the understanding that all that gay and lesbian families seek is to have our love and commitment recognized and legally protected. Yet NOM futilely and painstakingly attempts to convince otherwise.

The fact that you had to "steal a crowd" from someone else's event to create the illusion that people support your cause is evidence that you and your cohorts are truly scraping the bottom of the barrel.

Americans want the truth. And the truth is voters in New Hampshire want the legislature to leave the popular marriage law alone and focus on the economy and budget matters.

With the example of supposed Christians like Brian Brown and similar professional Christians, it is little wonder that the "no-religion" category is the fastest growing among young adults. How can anyone with a shred of integrity and honesty want to wear the Christian label if it puts them in the same ranks as the liars and hate merchants at NOM and its allied "family values" organizations.
Posted by Michael-in-Norfolk at Wednesday, October 26, 2011