Abraham Lincoln: A Life in the Closet? 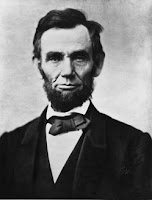 Somewhat over a year ago I wrote several posts on this blog and on the Bilerico Project that looked at evidence that increasingly suggests that Abraham Lincoln may have been the nation's first gay president, albeit a largely closeted one. Now, Mark Segal, founder and publisher of Philadelphia Gay News, has written a lengthy piece on Linclon as part of the 2011 National Gay History Project. The piece can be found here on The Bilerico Project and deserves a full read. Despite what seems to be rather convincing evidence, I'm sure many historians - and particularly anti-gay Christianists - will continue to deny the facts and bad mouth those like Segal who believe that history needs to reflect the truth not merely cherry picked facts that support certain prejudices and don't run afoul of discriminatory sensibilities. Here are a few highlights (again, you need to read the full piece):

Abraham Lincoln (1809-65) may likely be the most studied and researched of the United States presidents. The first reference to him possibly being "homosexual" came from notable Lincoln expert Carl Sandburg in his 1926 biography, Abraham Lincoln: The War Years.

In describing the early relationship between Lincoln and his close friend, Joshua Fry Speed, Sandburg wrote "a streak of lavender, and spots soft as May violets." This line got historians talking about an issue from which many had previously shied away. Still, the biography was written in the early 20th century, a time when such topics were only discussed in whispers. But by including the line, Sandburg felt the relationship deserved acknowledgement. It wasn't until 2005 when the first book was published on Lincoln's relationships with men, C.A. Tripp's The Intimate World of Abraham Lincoln.

Detractors of Lincoln's possible homosexuality, such as historian David Herbert Donald, often say there is no new evidence on Lincoln. Yet historians continue to draw fresh conclusions from Lincoln's letters.

Yet history, like everything else, is open to interpretation and influenced by new findings. Bias also motivated the retelling of historical events. The best example of bias in American history is the story of Thomas Jefferson and his slave/concubine Sally Hemings, which was not accepted as a truthful account until 1998 -- and only after DNA proof.

In 1830, when Lincoln's family moved to Coles County, Ill., he headed out on his own. At age 22, he settled in New Salem, Ill., where he met Billy Greene -- and, as Greene told Herndon, the two "shared a narrow bed. When one turned over the other had to do likewise." Greene was so close to Lincoln at that time that he could describe Lincoln's physique. However, Lincoln was poor at the time and it was not unusual for men in poverty to share a bed.

In 1837, Lincoln moved to Springfield, Ill., to practice law and enter politics. That's where he met the two men who would be his greatest friends throughout his life. One, Joshua Fry Speed, became his bed partner for a while; the other was law partner Herndon. Beyond the revelation that Lincoln and Speed had an intimate friendship, little has been written about how diligently Speed worked for Lincoln's legal and political career. Speed's name popped up in many of Lincoln's legal filings and on the Illinois Whig Party's central committee. The two were almost inseparable. Most Lincoln historians agree this relationship was the strongest and most intimate of the president's life. What they don't agree on is why they slept in the same bed together for four years when they had the space and means to sleep separately, as was expected of men their age.

Lincoln's most emotional and intimate writings were contained in his letters to Speed. From the time they lived together until shortly after Speed married and moved to Kentucky, Lincoln always signed his letters "forever yours" or "yours forever."

After Speed and Lincoln's marriages, there were no traces of other men in Lincoln's life until Elmer Ellsworth in 1860. . . . . Lincoln met Ellsworth through these displays and the two became friends. Lincoln invited Ellsworth, who had been a law clerk in Chicago, to move to Springfield to study law. Ellsworth became devoted to Lincoln and adored by the entire Lincoln family. One author wrote that it seemed Lincoln had a "schoolboy crush" on the much-younger Ellsworth. He first worked in Lincoln's law practice, then moved on to his political career and eventual campaign for president. Once elected, Lincoln asked Ellsworth to accompany his family to Washington.

Ellsworth would be the first Union soldier killed in the war. After hearing of the tragedy, Lincoln wept openly and went with Mrs. Lincoln to view the soldier's body. Lincoln arranged for Ellsworth to lay in state in the White House, followed by a funeral. The president was inconsolable for days.

In 1862, Lincoln met Capt. David Derickson, who served as his bodyguard, providing protection for the president when he commuted from the White House to his cottage at the Soldier's Home. Lincoln spent about a quarter of his presidency at the cottage, which allowed him some escape from D.C.'s summers and from public interruptions at the White House.

Lincoln and his bodyguard became close, and historians Tripp and David Herbert Donald noted two recorded mentions that Lincoln and Derickson slept in the same bed: Derickson's superior, Lt. Col. Thomas Chamberlain, and Tish Fox, the wife of Assistant Navy Secretary Gustavus Fox, both wrote about it. Tish wrote in her diary that Derickson was devoted to Lincoln and "when Mrs. Lincoln was away, they slept together."

But there were more than just two eyewitnesses to this relationship. After the war, Chamberlain published an account of the regiment called "History of the 150th Regiment of Pennsylvania Volunteers, Second Regiment, Bucktail Brigade." Before it was published, many members of the company reviewed the manuscript . . .

The Bucktails witnessed the relationship between the president and his bodyguard, which was public enough that they knew Derickson kept him company when Mrs. Lincoln traveled, and wore his nightshirt. Historical interpretations aside, why would the president, then in his 50s, sleep with his bodyguard?

Taken individually, accounts of Lincoln with other men may not offer enough proof that he was gay. But the pattern reveals a man who, in his sexual prime, slept exclusively with another man for four years -- two of those years (according to Donald) without romancing someone of the opposite sex; who wrote a poem about a boy marrying a boy; and who, as president, slept with his bodyguard.

From historical records, one can conclude that Lincoln enjoyed sleeping with men. He did so when it was acceptable in youth and poverty, and also when he was older and successful. While it is documented that Lincoln slept with several men, there is only one confirmed woman who shared his bed -- Todd.

Speed was apparently the love of his life. Lincoln resisted marriage as long as he could, only marrying after Speed was well-entrenched in his own marriage -- a phase that coincided with Lincoln's "mental distress."