NOM Continues to Push the Myth of Christian Persecution 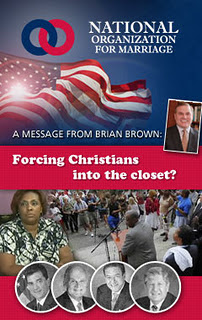 The Christianists continue to want the special right to persecute and demonize those who don't drink from their vat of religious belief Kool-Aid, with gays being a favored target of their persecution. As younger voters and others are coming to endorse LGBT equality, the result has been for the Christianists such as hate mistress/self-enriching whore Maggie Gallagher and kindred hate merchants at the National Organization to try to play the victim role and claim that is they who are being persecuted. It's of course a shameless lie, but then when a Christianist's lips are moving the last thing to expect is to hear the truth on virtually any issue. One of the developments that is causing particular angst among the hater merchants is the fact that those who sign petition to place anti-gay initiatives on the ballot face having their names made public. It should be noted that even far right Justice Antonin Scalia believes in having the names of petition signers revealed as a basic principal of democracy. Worse yet from NOM's perspective is the fact that those who financially underwrite NOM's activities may ultimately have their identities revealed (to date NOM has lost every campaign disclosure law contest). This latter point causes NOM severe distress because I continue to suspect that NOM's largest bank rollers may include the Mormon and Catholic Churches. Brian Brown at NOM recently whined about Christian persecution on NOM's blog. Here's a sampling of the lies and batshitery:

Watching two boys kiss is as important as anything in math class? In one sense, of course, we should not be surprised. The heart of the gay-marriage movement is a new moral idea: There is no difference between two men in a sexual union and the union of a husband and wife, and if you see a difference there is something wrong with you.

Of course once the government accepts the legitimacy of this position, public schools are going to reflect and promote, with your tax dollars, this new moral norm in a variety of ways, some we can predict and some we cannot. This is a movement that has trumpeted what they believe and want, and then accuses others of lying or bad faith when they say those beliefs and demands will have consequences.

But for the gay-marriage movement, at this point respect is not enough. It's not a level playing field. It's second-class citizenship for Christians and other traditional faith communities. Just a few years ago a gay teacher could have been fired. Now a Bible-believing Christian has to be "in the closet" or get fired.

In other important news, rich New York billionaires promised four GOP senators they would be "protected" if they betrayed the people they represent, the promises they made, and voted for gay marriage.

Finally, disturbing news out of Washington State. The Secretary of State's office on Monday began making public the names of 137,500 people who signed Referendum 71 petitions two years ago to repeal a civil union law. The lawsuit designed to prevent the disclosure of these names, given the organized efforts to harass and threaten petition signers in Prop 8 and in Massachusetts, may have failed for now. But the two-year delay, we hope, has given the zealots time to cool their tempers and re-evaluate a strategy designed to intimidate people for exercising their core civil rights.

Please pray for each of the 137,500 and for the people who disagree with their views. Democracy demands a culture of civic respect even when we passionately morally disagree.

Naturally, Brown's screed also includes a call for money. As for telling the truth, Brown wouldn't recognize the truth if it hit him in the head with a two by four. And as for something being wrong with opponents of gay marriage, I would suggest that they DO have something psychologically wrong with them if equal rights for others threaten their house of cards belief system.
Posted by Michael-in-Norfolk at Monday, October 24, 2011