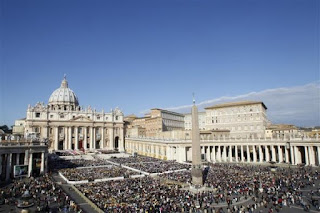 I will be the first to admit that I rarely agree with anything emanating from the bitter old queens in dresses at the Vatican who all too often turn Christ's Gospel message upside down in their quest for power, control, and most importantly money. But I guess once in a while even such people get something right. Hence the Vatican's condemnation of the cult of free market controls which often morphs into a struggle of the survival of the fittest (or most greedy) with the vast majority suffering in poverty and varying levels of neglect as the amoral and greedy waltz away with most of the profits and resources. The interesting thing to watch will be to see how this new Vatican announcement plays with the Christian Right adherents of the prosperity Gospel and the Tea Party crowd who would throw most citizens to the wolves as they hoard money and possessions for themselves. Candidly, nothing would please me more than to see a rift develop between conservative Catholics and the greedy hate merchants of the Christian Right and GOP. Reuters looks at this in some ways surprising development. Here are some highlights:

The Vatican called on Monday for the establishment of a “global public authority” and a “central world bank” to rule over financial institutions that have become outdated and often ineffective in dealing fairly with crises. The document from the Vatican’s Justice and Peace department should please the “Occupy Wall Street” demonstrators and similar movements around the world who have protested against the economic downturn.

“Towards Reforming the International Financial and Monetary Systems in the Context of a Global Public Authority,” was at times very specific, calling, for example, for taxation measures on financial transactions. “The economic and financial crisis which the world is going through calls everyone, individuals and peoples, to examine in depth the principles and the cultural and moral values at the basis of social coexistence,” it said.

It condemned what it called “the idolatry of the market” as well as a “neo-liberal thinking” that it said looked exclusively at technical solutions to economic problems. “In fact, the crisis has revealed behaviours like selfishness, collective greed and hoarding of goods on a great scale,” it said, adding that world economics needed an “ethic of solidarity” among rich and poor nations.

“If no solutions are found to the various forms of injustice, the negative effects that will follow on the social, political and economic level will be destined to create a climate of growing hostility and even violence, and ultimately undermine the very foundations of democratic institutions, even the ones considered most solid,” it said.

It called for the establishment of “a supranational authority” with worldwide scope and “universal jurisdiction” to guide economic policies and decisions.

Asked at a news conference if the document could become a manifesto for the movement of the “indignant ones”, who have criticised global economic policies, Cardinal Peter Turkson, head of the Vatican’s Justice and Peace department, said: “The people on Wall Street need to sit down and go through a process of discernment and see whether their role managing the finances of the world is actually serving the interests of humanity and the common good. “We are calling for all these bodies and organisations to sit down and do a little bit of re-thinking.”