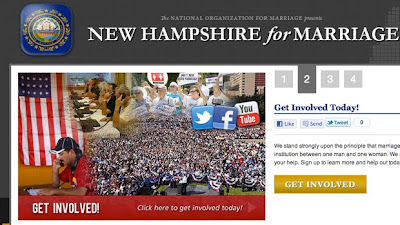 I continue to maintain that there are no bigger liars than the professional Christians and the self-anointed leaders of allegedly "family values" organizations. If their lips are moving or if they are putting out propaganda on the websites, it is probably 99.9999999999999999999900999% safe to assume that they are lying. A case in point is NOM and its effort to make the gullible believe that there is wide spread support for NOM's anti-gay jihad.

Those who have gone to NOM's supposed rallies to "support marriage" have repeatedly reported that the crowd levels are at less than 100 - sometimes only 10 to 20 NOM supporters. Obviously, this truth would not play out well as NOM tries to intimidate political whores legislators within the GOP and project the appearance of huge broad based support. The solution? So what is NOM's solution? To photo shop photos from Obama rallies in 2008 and make them appear to be from failed NOM events. It's the height of dishonesty and untruthfulness, but it's standard operations for NOM and similar anti-gay organizations.

Fortunately the LGBT community has folks like Jeremy Hooper of Good As You who expose the lies and hypocrisy of NOM and its hate merchant allies. Recently, Jeremy put up two posts that look at NOM's photo shopping efforts aimed at making the foul organization look powerful and its events well attended. 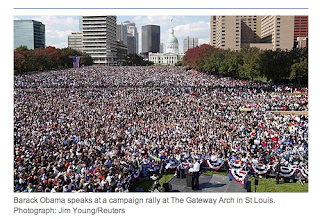 The first post looks at a photo on NOM's New Hampshire for Marriage page. The image at the top of this post from NOM's web page shows a huge crowd. The only problem is that the base photo is in actuality from a Barack Obama rally, not a NOM event - the real photo is at left. Note how the individuals, their clothing and placement in the photos are identical (click the images to enlarge them).

Some might possibly be able to use mental gymnastics to excuse a one time error on NOM's part and ignore the deviousness of the "godly Christians." However, as Jeremy again adeptly goes on to document, such lies and disinformation are the norm not the exception at NOM. A second post at Good As You confirms NOM's disingenuous tricks. As Jeremy notes:

Last night, I showed you how the National Organization For Marriage, staunch pro-DOMA warriors, are using a crowd shot from a rally in support of now-President Obama, staunch anti-DOMA voice, in order to beef up their reliably paltry rally pics. Now comes one more, from the same NOM-branded New Hampshire For Marriage site. And this one is even worse than before in the way it so clearly attempts to make NOM president Brian Brown's speech seem well-attended. NOM's image: 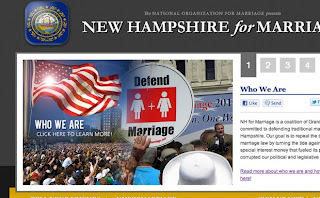 The actual source of the base photo is again from a Barack Obama rally, this time in Columbus, Ohio [which looks like the image below].

What is truly disturbing is the mindset within NOM and the Christian Right in general that views lying, disseminating known untruths, and denigrating other tax paying citizens as perfectly fine as if somehow Christians, using the term loosely, of course, are exempt from the Commandment against bearing false witness and lying.
It is more than disconcerting that nowadays the biggest liars are "Christians" and their political allies in the Tea Party and the GOP.
Posted by Michael-in-Norfolk at Tuesday, October 25, 2011