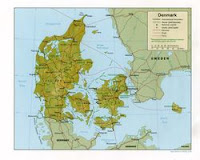 I have noted before how the United States - self0style land of the free and home of religious freedom - is falling further and further behind in delivering on its purported promise of equality compared to other nations. Denamark will join the ranks of European nations allowing full same sex marriage next year and now an appellate court in Brazil has upheld same sex marriage. Meanwhile most of the USA continues to enshrine religious based anti-gay discrimination in the form of state laws and/or state constitutional amendments. And let's not forget the insidious discrimination set forth in DOMA. Indeed, the USA increasingly demonstrates itself to be a hypocritical farce. Here are highlights from the Copenhagen Post on developments in Denmark:

In just a few months, homosexuals will get the right to marry in the Church of Denmark – they will, in any case, if the new church minister has his way.

The government plans to introduce a bill just after the New Year that will allow same-sex couples to hold weddings in the Church of Denmark and be ‘married’ under Danish law. Same-sex couples are currently allowed to have ‘registered partnerships’, a civil status, but are barred from marriage and church weddings. “The first same-sex weddings will hopefully become reality in Spring 2012.

In 1989 Denmark became the first country in the world to legalize civil unions between same-sex partners. But the country stopped short of calling it “marriage” and same-sex couples still are not allowed to have marriage ceremonies in the Church of Denmark.

Polls taken over the years, and right up until last week, have consistently shown that around 69 percent of the population supports same-sex marriage in the church. The Danish clergy and politicians have lagged behind popular opinion, however.

Brazil’s top appeals court has ruled that two women can legally be married. It’s the highest court in Brazil to uphold a gay marriage.

In June, a state court judge ruled that two men could legally change their civil union into a full marriage. In May, Brazil’s Supreme Court ruled that gay civil unions could be recognized. But it stopped short of recognizing full marriages.

Since then, several couples have petitioned to have their civil unions recognized as full marriages. Some of those have been approved by lower courts, others have been blocked. Tuesday’s ruling by the Supreme Appeals Court overturned two lower court’s ruling against the women.

It is long past time that religious based discrimination be stripped from all laws in the United States - including the backwater known as Virginia - and other countries that allow the hate and bigotry of extremists to deprive other citizens of full civil law equality.
Posted by Michael-in-Norfolk at Wednesday, October 26, 2011