The dishonesty and lies of self-labeled "Christian" organizations truly makes me want to vomit at times - and never refer to myself as a Christian again in my life time. Who wants to be associated in any way with such foul people. One of the big lies now being disseminated by the Christian Right is that Christians are being "bullied" and "persecuted." In the objective world, that means that people are beginning to stand up and oppose Christianists from inflicting their hate and fear based religious beliefs on all of society. Is this bullying or persecution? Not hardly. For a glimpse of true bullying and persecution one need only look at yesterday's post with the video of the 15 year old Ohio student being beaten as the attacker yelled anti-gay slurs. Nonetheless, the Christianist liars and hate merchants continue to play the victim card even as they seek to bully, disparage and victimize gays, immigrants, Muslims, non-Christians and racial minorities. Here's a sampling of FRC's disingenuous bullshit: 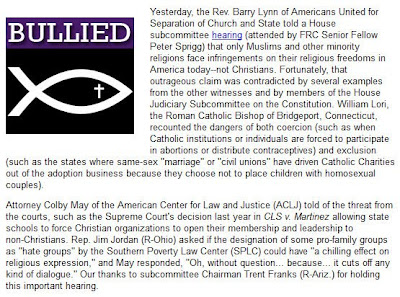 I've had the pleasure of chatting in person with Barry Lynn and the man is amazing. He knows his facts and data and equally importantly, he believes in the concept of separation of church and state. A concept that hate groups like FRC and its allies would like to eradicate. One can't help but wonder when Congress is going to stop giving a platform to groups like FRC. Would they allow testimony from the KKK or Aryan Nation? FRC and its allies should not receive any different treatment than the KKK or other white supremacy groups. Hate and bigotry is still hate and bigotry even when wrapped in the Bible.
Posted by Michael-in-Norfolk at Friday, October 28, 2011

I can't honestly say I'd like to see any individual persecuted. It's just not my nature, but in all honesty I think those who make up the Radical Christian Right deserve any persecution to which they may feel they are being subjected.

I have no doubt whatsoever that there are leaders among the radical Christians who would gladly act as an American Taliban, if they thought they could get away with it.

But there is something that bothers me even more than those radical leaders, and that is those who blindly follow.

I know there are good hearted people, caring people who are members of Churches associated with the Radical Christian Right who do not personally buy into the hate, but for different reasons that are difficult to understand, they maintain their association with a group with which they have less and less in common.

And just as concerning is that many of those who do disassociate themselves with the Radical Christian Right are not joining the liberal Christian churches, but turning away from faith altogether.

I'm an old man. I have lived a blessed life. As a man of faith, I believe that ALL things work together to advance the kingdom of God.

This world is in chaos such as I have not seen in my lifetime. But among the chaos and the hopelessness and the hate, I honestly seem the flickering light of hope. There are good things happening in the world and good people are working to see that they do.

In my particular denomination, we believe in the universal church of God and the brotherhood of man. We believe that the Kingdom of God is not a heavenly place far away, but is here and now. We believe that God's grace extends unmerited to all individuals just as they are. My prayer is that radical Christians, those you call Chrtianists will come to believe this too.