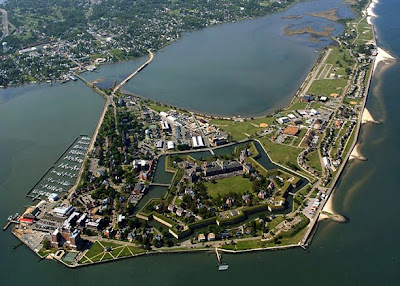 In a move that local leaders of all political stripes have sought aggressively, Barack Obama will reportedly name historic Fort Monroe which has guarded the mouth of Hampton Roads' harbor for over 180 years. On its site, fortifications have existed as far back as 1609. Fort Monroe is the largest stone fort ever built in the United States and it has seen an interesting history over the years since construction began in 1819 as part of a plan of coastal defenses after the British burned Washington, D. C. during the War of 1812. This designation will help ensure that Ft. Monroe will exist as a tourist destination and that its history is not lost. For the City of Hampton - whose leadership has shown itself to be among the most LGBT friendly in the region - the national monument designation should be a huge boon. Interestingly, Hampton Roads Business OutReach's ("HRBOR") December business networking event on Thursday, December 8, 2011, will be hosted by the City of Hampton at Ft. Monroe. Here are highlights from the Virginian Pilot:

Fort Monroe will take its place among the nation's most revered places on Tuesday, when President Barack Obama is expected to designate much of the former Army base a national park.

U.S. Secretary of the Interior Ken Salazar said in a phone interview Saturday that Obama would use powers granted to him under the Antiquities Act to preserve the Hampton waterfront fortress and hundreds of acres of open space along the Chesapeake Bay.

More than a dozen presidents, starting with Theodore Roosevelt, have used the 1906 act to protect historic or endangered places that loom large in American lore, including the Grand Canyon and the Statue of Liberty.

The announcement delighted local and state officials and the region's bipartisan congressional delegation, which introduced legislation to create a national park but pressed Obama to use his executive powers to make it happen more quickly.

Salazar said bipartisan backing for a national park, buttressed by broad public support, helped persuade Obama to act. He also cited jobs creation as a motivator for the president, saying that the money spent by tourists who visit the park would create many jobs in coming years.

"It's a huge economic opportunity for southern Virginia," Salazar said, noting that national parks draw tourists and attract businesses that cater to them.

Fort Monroe's most historic chapter came during the Civil War, when it remained a bastion of federal power even after Virginia seceded. Early in the conflict, three escaped slaves reached the fort and asked for the Union Army's protection. The commanding general's decision not to send the men back to their Confederate owners set the stage for a mass migration of slaves to Fort Monroe and helped bring about the Emancipation Proclamation.

Fort Monroe won't be only a national park, though. If the president follows the blueprint of the pending legislation, the park service would manage slightly more than half of the property, including the north beach area and about 90 acres inside and around the moated stone fortress. The Fort Monroe Authority, a state entity, would handle the rest - including limited new development in certain areas.