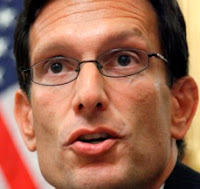 As readers may have figured out, I REALLY dislike Virginia Congressman Eric Cantor. The man is power mad and as I've noted before, I suspect his mother would be for sale for the right price - and not a super high price. His alliance with he Christian Right is also reminiscent of the kapos who collaborated with the Nazis. For power and self-advancement, Cantor doesn't hesitate to make deals with the Devil. He's a disgrace to Virginia. A story from Think Progress underscores Cantor's never ending willingness to sell out average citizens for the wealth and the Wall Street crowd that helped destroy the nation's economic stability yet who have never been made to face accountability. One has to wonder when the Hell Cantor's constituents are going to wake up to reality and vote him from office. Here are some highlights from Think Progress:

When the Occupy Wall Street demonstrations first gained some national prominence, House Majority Leader Eric Cantor (R-VA) derided the protesters as a “mob,” saying, “Believe it or not, some in this town have actually condoned the pitting of Americans against Americans.”

Cantor has plenty of reasons to bash the protests because, as Roll Call noted today [yesterday], Cantor’s top contributor this year is Wall Street:

Cantor’s personal political action committee has collected close to $2 million so far this year, placing it well ahead of any other leadership PAC in the House or Senate. In all of his fundraising efforts, top executives at banks, hedge funds and securities and investment firms play a starring role. Securities and investment industry donors have given close to $350,000 to both Cantor’s campaign and his leadership PAC this year, making them his top source of donations, according to the Center for Responsive Politics.

But Cantor has raised millions more than that for a lucrative operation known as the Cantor Victory Fund 2012…Ten major donors, many of them top executives with finance industry firms, have given $50,000 or more this year to the Cantor Victory Fund, which has collected $2.4 million, according to the most recent public disclosures.

Cantor has pushed several policies near and dear to Wall Street’s heart, including protecting tax loopholes for hedge fund managers, while managing to come up with no ideas for addressing income inequality. In fact, he believes we should just depend on the wealthy to bring down inequality through the goodness of their hearts. And so far, Wall Street has certainly shown its appreciation for Cantor’s positions.

The best thing that working Virginians could do would be to show Cantor the door come the next election cycle.
Posted by Michael-in-Norfolk at Tuesday, November 01, 2011