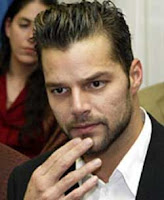 It's sad when Americans have to seek citizenship in other nations in order to have full civil legal rights. Yet that appears what Singer Ricky Martin has done in order to legally marry his partner. I can fully understand the feeling and have not infrequently pondered leaving the USA since I am not a full citizen in America. Indeed, in Virginia, I'm not even a 2nd class citizen given Virginia's virulently anti-gay legal climate. As I have less than jokingly noted before, pet owners have far more legal recognition afforded to their relationships with their pets than same sex couples do with their partners even if they have been together for many decades. The United States is truly falsely advertised as a nation of equality and a nation offering freedom from religious persecution. But back to Ricky Martin. It seems that the Spanish government has sought to help the performer realize his dream of a legal marriage. Even though because of DOMA it will be treated as a nonentity. Here are some highlights from Pink News:

Spokesman Jose Blanco told a news conference that ministers had agreed to grant him a “letter of naturalization”, issued in special circumstances, because of his “personal and professional links with Spain”.

Spanish newspaper El Pais reported that Martin sought citizenship in order to marry boyfriend Carlos Gonzalez Abella, with whom he is bringing up his twin three-year-old sons.

Appearing on the Larry King show last year, he had said: “I would get married… There are many countries around the world where same-sex marriage is a right. Not in Puerto Rico, unfortunately. And not in many states in America.

“Yes, we could go to Spain and get married. We can go to Argentina and get married. But why do we have to go somewhere else? Why can’t I do it in my country where the laws are – you know, protecting me?”

He added: “I can go to Spain. I have many friends in Spain. And get married. And make it very beautiful and symbolic. But… I [can't] do it in the backyard of my house. I want to have that option. I don’t want to be a second class citizen anymore. I pay my taxes. Why can’t I have that right?”

Second class citizen gets old especially when the only true justification for it is so that nasty bigots can feel better about themselves and feel free to look down on others whether it be to feel a sense of power, privilege, or ignore the fact that in truth they are the ones who are morally inferior. Were circumstances different, I would never have returned to the USA after our recent trip to Europe.
Posted by Michael-in-Norfolk at Saturday, November 05, 2011