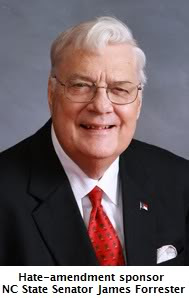 It's deemed not nice to speak ill of the dead, nut I am finding it difficult to find much sadness in my heart over the death of North Carolina State Senator James Forrester who died on Monday in Gastonia, North Carolina. Forrester made a career out of pushing hate and anti-gay initiatives and his last major political act was to put a constitutional ban on same-sex marriage on the North Carolina ballot next spring to coincide with the Republican primary in that state. Forrester was but one in a long line of politicians who have used claimed religious belief to malign and harm other citizens. If there is a God, one has to wonder how a man who made hatred and bigotry his signature effort will be judged. The same way he judged others? If such is the case, I would not want to be Forrester. I'm sure Forrester's family is in mourning, but as Pam Spaulding reported shortly before her husband's death his anti-gay wife, Mary Frances, made it publicly and politically clear that there would be no deathbed conversion regarding the discrimination amendment or his views of the civil rights of LGBT North Carolinians. Here are some highlights from the New York Times on Forrester's passing:

State Senator James Forrester, a physician and social conservative, died on Monday in Gastonia, N.C., just weeks after leading a successful fight to put a constitutional ban on same-sex marriage on the North Carolina ballot next spring. He was 74.

He was known for regularly filing a bill that would allow voters to decide whether to add a same-sex marriage ban to the state Constitution.

Under Democratic control, the Legislature had blocked debate and votes on the measure, saying that state law already limited marriage to a man and a woman. But after Republicans, for the first time since 1870, took over both chambers in the elections last fall, the question was approved in September.

Mr. Forrester was a nemesis of the gay rights movement. Last year he apologized for saying at a local Republican event that “slick city lawyers and homosexual lobbies and African-American lobbies are running Raleigh,” a reference to state government.

Shortly before the September referendum debate, Mr. Forrester called Asheville, N.C., known for being gay friendly, a “cesspool of sin.”

It's difficult to see how Forrester's passing is a loss for humanity. Some people are just plain evil, and Forrester seems to have been one such individual. Here in Virginia some such people go by the name Ken Cuccinelli, Robert Marshall, Matt Barber, Matt Staver, and Victoria Cobb to name a few.
Posted by Michael-in-Norfolk at Tuesday, November 01, 2011