The GOP's Real View of Blacks 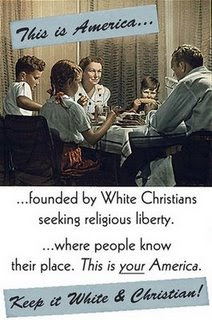 One of the things that drives me to distraction is the manner in which black Americans continue to allow themselves to be played by the white Christianists and the decidedly non-big tent Republican Party. Even when clear indicators of the actual disdain - id not open contempt - for black citizens is visible, many blacks, especially within the black pastor ranks continue to willingly play the role of water carriers for those who in their hearts hate them and merely seek to use them to accomplish white Christianist/conservative goals. The image above accurately reflects, in my opinion, the real mindset of the Christianists and the GOP. Anyone who claims otherwise is a liar. Even during the years that I was involved in a far less toxic Republican Party than the one that exists today, there was a steady racism that bubbled up from some within the party. It's only become far worse nowadays with the GOP increasingly defined by who it hates. Colbert King has a column in the Washington Post that looks at this reality. Here are some highlights:

Oh, what a “loverly” time we are having in post-racial America. Except when the outrageous holy of holies of the American conservative movement elect to have their say, as happens often, most recently with right-wing oracles Ann Coulter and Pat Buchanan.

It fell to Coulter, a successful author, columnist and Fox News contributor, to drive home the point that, notwithstanding what African Americans might think of the 14th Amendment and the Emancipation Proclamation, we remain the property of white America.

Coulter would apparently have those of us of color believe that it matters not what we think or where we stand on the political spectrum but that, when it comes to the relationship of blacks to white folks, we still are theirs.

Speaking of our place in America, MSNBC contributor, author and former Republican presidential candidate Pat Buchanan reminds us in his just-released book, “Suicide of a Superpower: Will America Survive to 2025?,” of what black folks have been missing. I never knew we had it so good.

Writing about the segregation era, Buchanan observes, “Back then, black and white lived apart, went to different schools and churches, played on different playgrounds, and went to different restaurants, bars, theaters, and soda fountains. But we shared a country and a culture. We were one nation. We were Americans.”

Gosh, I didn’t know that. Buchanan and I grew up in the same segregated Washington, D.C. I don’t recall black folks having much of a say in the decision to live “apart.” The situation about which Buchanan speaks so wistfully was, to my recollection, a racial apartheid arrangement strictly of white people’s making.

Buchanan’s latest screed to white Christian America’s decline (he’s written on this theme before, and it apparently sells) cites reasons for the deterioration. “Racial diversity,” he writes, is a major contributor to the country’s downfall. His book is peppered with gripes.

Ah, our post-racial America. A country where racism and anti-Semitism have no place . . . except on mainstream television networks’ talk shows, with coast-to-coast audiences who love to hear Coulter and Buchanan talk like that.

It goes without saying that we in the LGBT community are similarly viewed as either vermin or a threat to white Christian America. Why can't more people see this?
Posted by Michael-in-Norfolk at Saturday, November 05, 2011

Come on Michael. You're a highly educated and thoughtful man. You admit to once being a Republican but having left the Party because of what you saw there.

Can you really be blind to the fact that it is NOT just Republicans who are playing blacks? I think not.

The reality is Republicans are far, very far indeed, from being the worst players of blacks. That title belongs to some of the men and women within their own ranks.

Jesse Jackson and Al Sharpton have made themselves millionaires by playing their personal interests off the backs of their black brothers. The Reverend Jeremiah Wright has been playing black for his own self interest for decades and even a man as intelligent and educated as Barack Obama is said to be never caught on.

These three probably top the list, but the list is long and every big city and region has people who are on the list. We have two very well known ones here in the Houston area who are black, yet have enriched themselves and their careers by playing their black brothers. A few black catch on, but the majority never seem to do so.

The Reverend Martin Luther King was a true leader for black people and he gave his life for their cause. Willingly and knowingly gave his life, I might add. Today he is the first black man to be honored on the National Mall in Washington DC for his leadership, his courage and his vision as well he should be. But black people, for the majority, have long since forgotten the message and the truths that Rev King tried to instill in them.

They have replaced those truths with the self serving reverse racial rhetoric of black racist such as Jackson, Sharpton and Wright.

Rev King would be turning over in his grave in Atlanta if he could see what has become of the ideals he tried to instill in all Americans, black and white and whatever color. And he would be spinning in his grave to know the extent to which so called black leaders are doing to enrich themselves at the expense of those the claim to represent in today's world.