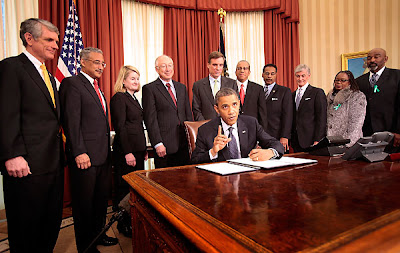 The photo above via the Virginian Pilot is from today's signing ceremony at the White Hose where Barack Obama utilized his authority under the Antiquities Act of 1906 to designate federally owned land of significant historical value as a national monument. As I have noted in prior posts, Fort Monroe is a unique historic treasure (another picture is set out below) that needs to be preserved for future generations. Moreover, the national monument designation will help increase tourism to the City of Hampton and create in the neighborhood of 2.000 jobs as per a study commissioned by the City of Hampton and the Commonwealth of Virginia.

What's amazing - as evidenced by the photo above - is that politicians of both parties supported the designation, including Virginia Governor Bob McDonnell and our local Congressman Scott Rigell (who I despise and who was endorsed by an anti-gay hate group when he ran for office). Thus, one would expect that it would be perceived that Obama score a home run with his action. Not so, however, if one looks at the comments on coverage on the national monument designation over at the misnamed Real Clear Politics where the only thing that is clear is that far too many of the readers drink Kool-Aid by the bucket full. The insane attacks on Obama by those who clearly knew NOTHING about Ft. Monroe were scary and evidence just how ignorant and depraved the GOP base has become.

One individual who deserves praise is Hampton Mayor Molly Ward (pictured third from the left above) who quietly worked to help make today's event happen. More importantly, she "gets it" that to be competitive in today's changing global environment, cities and localities must embrace diversity and welcome those who can bring talent and innovation to the economy and society be they black or white, gay or straight, native born or immigrants. Would that more in Virginia - including Virginia's current governor and attorney general, would figure this out and stop placing a "You're Not Welcome" sign across Virginia. I am proud to call Molly Ward my friend.

Posted by Michael-in-Norfolk at Tuesday, November 01, 2011