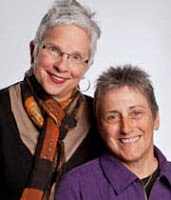 Having won its lawsuit at the district court level in Massachusetts - the Liar -in-Chief's DOJ is appealing the ruling - GLAD has filed a second lawsuit challenging DOMA and its discrimination against same sex couples legally married in their home state. DOMA represents an unconscionable intertwining of Christianist religious belief in the CIVIL laws and (1) seeks to lealizes religious based discrimination and (2) deprives lawfully married same sex couples of equal protection under the law - something supposedly guaranteed by the U. S. Constitution. It is far past time that the deference and special status given to conservative Christian beliefs afforded in the CIVIL laws be ended. The plaintiffs in the new lawsuit are a lesbian couple who have been barred from receiving federal employee benefits simply because they don't conform to the Christianist view of marriage. Here are highlights from GLAD's announcement:
*
On November 9, 2010 GLAD is filing our second major, multi-plaintiff lawsuit challenging the constitutionality of the federal Defense of Marriage Act (DOMA) and the government’s denial of protections and responsibilities to married gay and lesbian couples. This new action specifically addresses married couples in Connecticut, Vermont, and New Hampshire, and comes on the heels of a Massachusetts Federal District Court ruling this summer finding DOMA Section 3 unconstitutional.

“DOMA must fall. In 1996, when Congress passed DOMA, the stated goal was to harm gay people and same-sex families with this law, and sadly, it has succeeded. Married gay and lesbian couples fall through the federal safety nets that exist for other married people,” said Mary L. Bonauto, Civil Rights Project Director for GLAD. “We have to keep the pressure on and get DOMA off the books before it does even more harm.”
*
In Pedersen et al. v. Office of Personnel Management, GLAD represents five married same-sex couples and a widower who have all been denied federal rights and protections simply because they are married to a person of the same sex.
*
”Getting married was extremely meaningful to Ann and me,” said Joanne Pedersen, who, with her spouse Ann Meitzen, is a plaintiff. “We were shocked to discover that the federal government essentially looks on ours as a second-class marriage.”
*
Filed in Federal District Court in Connecticut, this suit addresses DOMA’s denial of marriages in connection with federal employees and retirees benefits programs, Social Security benefits, survivor benefits under federal pension laws, work leave to care for a spouse under the Family Medical Leave Act, and state retiree health insurance plans that are controlled by federal tax law. Several plaintiffs who have paid additional federal income taxes because they cannot file a joint federal tax return as a married couple will join the suit once they are officially turned down for refunds from the IRS.
*
More information on the lawsuit and the plaintiffs is available at www.glad.org/doma
Posted by Michael-in-Norfolk at Tuesday, November 09, 2010