Gay Brazilian Legally Wed in US May Still be Deported 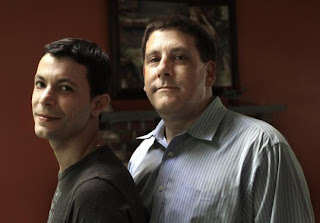 As noted in prior posts, one of the insidious results of the federal DOMA is that same sex couples legally married in their state of residence receive none of the legal recognitions under federal law afforded to heterosexual couples. The goal - which like every anti-gay law whether state or federal - is to punish LGBT citizens for their failure to conform to Christianist religious beliefs. Once again, one particular religious beliefs has been given special rights and codified into the federal statutes notwithstanding the U. S. Constitution's alleged promise of religious freedom to all. Not just conservative Christians. In the present story, the gay couple, Genesio Oliveira and Tim Coco (Oliveira is on the left), were in every respect legally married in Massachusetts. Nonetheless, under DOMA their marriage is not recognized by INS and the non-citizen spouse is given not rights that a straight spouse would receive under the immigration laws. To add insult to injury, the Liar-in-Chief's attorney general is the one pressing the deportation efforts against Oliveira. Thus, once again the Liar-in-Chief's actions show the lie to his claims to be a "fierce advocate" to LGBT individuals. Here are some highlights from the Boston Globe:
*
A Brazilian man who was recently reunited with his Massachusetts husband when federal officials temporarily allowed him into the United States said he could face deportation because the attorney general will not reverse the immigration ruling that first separated the couple.
*
In June, at US Senator John Kerry’s urging, federal officials temporarily allowed Oliveira back in the country on humanitarian grounds. Oliveira said the couple believed Holder would reverse the initial immigration decision. Oliveira, whose nickname is Junior, said that would have allowed him to apply for permanent residency, either on the basis of his marriage or as an asylum-seeker who feels threatened by anti-gay violence in his country.
*
The US attorney general’s office did not immediately return e-mails and phone messages yesterday.
*
The couple is looking at all options, including trying to reapply for asylum, suing the federal government, or trying to persuade Congress to pass a bill that would allow Oliveira to stay, Coco said. “But each one of those options come with risks,’’ he said. “Junior could be forced to go back.’’
Posted by Michael-in-Norfolk at Tuesday, November 09, 2010

Why they call it "Defence of Marriage" when
a)Gay marriage doesn't affect in any way christianist marriage
2) they are only defending their confouned anti-christian prejudices?