When Religion is at Odds with Human Rights 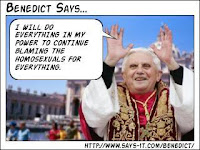 One would at first blush want to believe that religion should be a force that supports human rights and individual dignity. That initial reaction, sadly is very wrong. In the case of Roman Catholicism as dispensed by the Nazi Pope - not to mention fundamentalist Islam - religion itself fuels all kinds of atrocities and degradations of human rights: for women, for gays, and for many others who refuse to subscribe to the twisted and anti-knowledge religious dogma. A piece in Philly Magazine looks at this reality in terms of the Roman Catholic Church and does a great job of underscoring the utter moral bankruptcy of the bitter old men in the Vatican and in bishoprics around the world. Here are some highlights that reveal just how anti-human rights the Church is becoming:
*
This weekend, Pope Benedict XVI’s visit to Spain coincided with a denouncement about same-sex marriage in the otherwise progressive European country. Criticizing Spain for its “aggressive secularism” (the predominantly Catholic country was among the first in Europe to legalize gay marriage), the Pope rallied behind the notion that gay rights somehow conflicts with Catholic teachings.
*
[F]or the sake of simplicity, gay people, when you hear all about the pope’s fancy world-wind tour around Europe, consider what the real teachings of the Roman Catholic Church are all about insofar as you’re concerned: Two loving adults of the same gender who wish to marry each other is sinful and should not be sanctioned by any religion or municipality in the world. But an adult (priest) molesting children against their will should be forgiven, so much so that the church will kindly cover up the misdeeds and proceed to relocate said priest to another congregation with a fresh new batch of children to prey upon.
*
As the church continues to throw stones at gay people, it continues to campaign to cover up its own misgivings. And while homophobia pervades much of our society, both in Philadelphia and beyond, the institutionalized kind one finds in the guise of God’s love can be especially dangerous. For every two steps forward the LGBT community takes when dealing with issues of teen suicide, hate crimes and discrimination, the shadow of religion, especially the Roman Catholic Church’s anti-gay doctrine, makes the fight for equal rights more difficult and more complex – and wrought with more hypocritical thinking than you can shake a crozier at.
Posted by Michael-in-Norfolk at Monday, November 08, 2010