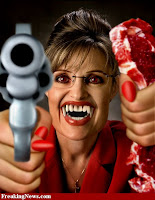 For years to come John McCain will likely be cursed for creating the GOP's version of the Frankenstein monster by selecting Sarah Palin as his 2008 running mate. But for that act, the lunatic of the north might have remained safely obscure in the wilds of Alaska where she could do only limited harm. Instead, the ignorance embracing (she seems to revel in her stupidity) and seemingly mentally unstable Palin is wreaking havoc on the GOP and represents perhaps the strongest force of all that will drive away sentient voters should she somehow gain the GOP nomination in 2012. With the GOP base increasingly made up of the ignorant, religious extremists and less than discrete white supremacists, the nomination process is tilted in Palin's favor. Meanwhile, the few rational folks still in the GOP leadership likely know that Palin as the nominee would likely guarantee the re-election of the Liar-in-Chief if for no other reason than he's not insane. Kathleen Parker, one of the few conservative intellectuals, if you will, left has a column in the Washington Post that looks at the GOP's Palin problem. Here are highlights:
*
Despite its considerable gains in the midterm elections, the GOP has a problem looming in the margins named Sarah Palin. She who can rouse the base like none other is now She to Whom Respect Must Be Paid. Like it or not.
*
Many within the so-called party establishment don't quite know what to do about Palin. She's adored by Tea Partyers, to whom she conveniently attached herself as soon as she sensed a shift in the air. A rogue like Palin isn't going to let a rogue movement fill a stadium - or a desert - without her.
*
Republican Rep. Spencer Bachus of Alabama recently had the audacity to assert what heretofore had been relegated to whispers behind closed doors: "Sarah Palin cost us control of the Senate." Bachus, who is likely to replace Barney Frank as chair of the House Financial Services Committee, noted that Palin endorsed some Senate candidates who couldn't possibly win, such as Christine O'Donnell in Delaware
*
Although Tea Party members tend to be over-45 white men - no implication intended regarding Palin's popularity, but infer at will - there is considerable overlap with the demographic formerly known as the GOP base, a.k.a. white Southerners and social conservatives, libertarian streak notwithstanding.
*
Watching Palin drop foreign policy and economic nuggets into the twitterverse confirms that the real agenda for Palin is President Palin, and therein lies fresh terror for Republicans. She's too powerful to ignore, and too (fill-in-the-blank) to take seriously. She is - in a word yet again whispered rather than uttered - "Dangerous."
*
Not only would Palin the presidential candidate drive away other Republican candidates, but she would most certainly lose a national election. Thus, the GOP finds itself in a pickle: How to shed itself of this attractive nuisance? The answer, alas, is the stuff of all complicated relationships: Can't live with her, can't live without her.
*
As much as I can't stand her, it WILL be fun watching Palin perhaps sound the death knell for GOP victories in 2012 if the Party leadership can't get rid of her. There is obviously, no controlling her.
Posted by Michael-in-Norfolk at Wednesday, November 10, 2010