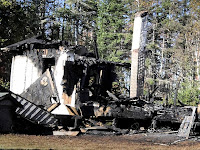 This isn't the first time that I have written about the direct responsibility the majority of churches bear for the active promotion of homophobia and as a result, the acts of violence against gays and the too numerous incidents of gay suicides. It is a message that needs to be shouted from the roof tops over and over until the larger public recognizes that hate and intolerance are too often the main stock in trade of the majority of churches. Pardon my "french" but the claims that conservative Christians that they don't condone violence and mistreatment of LGBT individuals is bullshit and their hypocrisy in even daring to make the claim is incredible. An op-ed in the National Post looks at the hypocrisy and the direct link between churches and the fostering of homophobia. The piece starts out referencing the arson committed against the home of a gay couple (shown in the photo at right) and goes on a roll there after, including demanding that non-anti-gay Christians need to speak out. Here are some highlights:
*
The Bishop for the Diocese of Charlottetown Richard Grecco responded to a recent homophobic attack in Prince Edward Island in an interview with The Charlottetown Guardian on Friday. The incident involved a gay couple whose house was set on fire during the night of October 18. In the months leading up to the arson, the couple says that it was subjected to a series of disturbing events, including an anonymous letter condemning the sexual orientation of the men as sinful.
*
In the article, Grecco was quick to announce his support for the victims of the attack, but was even quicker to absolve religion of any responsibility for the incident. According to Grecco, his church “preaches love for everyone, even [for] those with whom it disagrees.”
*
What Bishop Grecco purports is actually quite false. In reality, religion is indeed responsible for homophobia because churches have great power to influence the opinions and actions of those who subscribe to their teachings. Church doctrines are the most important parts of morality for devoutly religious people and as such, religious contempt for homosexuality can manifest itself as hatred toward gay people.
*
In the arson case, it appears that those responsible were religiously motivated because of the language used in the anonymous letter received by the victims, which specifically addressed the sinfulness of homosexuality. Sin is a uniquely clerical concept and the religious connotation in the letter is clear. To suggest that religious opinions against homosexuality had no possible connection to the committing of this crime is not taking responsibility in any adult sense.
*
Sexuality is an inseparable part from a person and thus to attack a gay person for being gay is a personal assault. The victims of this crime were not attacked for what they do but rather for whom they are. . . . when gay rights issues are discussed, religion is there at every possible opportunity to stall the pursuit of gay people to have themselves and their relationships deemed as valid and as productive parts of society. This hypocrisy simply will not do; churches cannot have it both ways.
*
A religion or ideology simply cannot preach against a group of people for centuries but claim to be innocent when such preaching leads to violence against that group.
*
Many moderate Christians may interpret this message as a direct attack on the foundations of their faith, but it is not intended as such. Rather, its goal is to highlight the hypocrisy of churches that try to wear two hats at the same time when it comes to gay rights. Gay people are getting tired of being told that Christians care about them when these same people appear to be road blocks in their goal of equal treatment. Such moderate Christians have real power to help bring about change if they will commit to confronting homophobic sentiments in their churches.
Posted by Michael-in-Norfolk at Wednesday, November 10, 2010