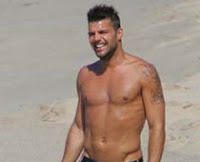 In an example of a celebrity using their star power to push the march for equality, Ricky Martin has discussed his desire for the right to legally marry in Puerto Rico. Given Martin's popularity on the island, his comments definitely help push the conversation and highlight the unfairness of the current anti-gay laws. He also is helping Puerto Ricans and others to realize that other Latin nations already have marriage equality, thus exposing the ridiculous backwardness of Puerto Rico and the USA where religious based discrimination is supposed to be illegal. Of course, that claim of religious freedom is a lie and Christianist religious beliefs are afforded special rights and intertwined with the civil laws. Here are highlights from Martin's remarks in Movies NDTV:
*
Pop star Ricky Martin, who publicly admitted that he is a homosexual earlier this year, wishes to legally marry his boyfriend in Puerto Rico. The Un Dos Tres hitmaker wants gay marriages to be legalised in his native land and is ready to wait until then to tie the knot, reported Contactmusic.
*
"I would get married... There are many countries around the world where same-sex marriage is a right. Not in Puerto Rico, unfortunately. And not in many states in America. "Yes, we could go to Spain and get married. We can go to Argentina and get married. But why do we have to go somewhere else?
*
"I can go to Spain. I have many friends in Spain. And get married. And make it very beautiful and symbolic. But... I (can't) do it in the backyard of my house. I want to have that option. I don't want to be a second class citizen anymore. I pay my taxes. Why can't I have that right?" said Martin.
*
Like Martin, more and more of us in the LGBT community are tired of being second or third class citizens. The nation's laws are supposed to protect everyone, but they don't protect LGBT citizens and underscore that the America that self-described patriots like to project is, in fact, a lie. A lie that is increasingly underscored as other nations move forward granting full civil law equality to their LGBT citizens.
Posted by Michael-in-Norfolk at Friday, November 12, 2010