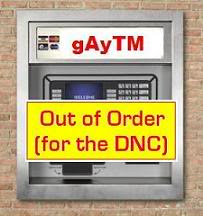 group. Some have been full of recriminations. Others have been full of heartbreak and sadness. Out of these volumes of thoughts and comments, David Mixner has a great post on his blog that perhaps best expresses my feelings on this day after election day. The election results in Virginia make it clear that our only short term hope is action at the federal level Yet, once again it has been made patently clear that some high in the Democratic Party - including President Obama - who all too often pretend to be our allies did nothing for our causes and left us to crash and burn in Maine and elsewhere. Why? Because they simply do not give a damn about us or our lives. All they want is our money, votes, and volunteer efforts. I have touched on this theme before, but yesterday underscored the need for the GLBT community to get serious and stop ALL money contributions to Congressional Democrats until they and Obama get off their unscrupulous asses and deliver on Obama's campaign promises. That's right ZERO money. And ZERO assistance in volunteer campaign efforts. If they will not help us, then we need to stop helping them. We also need to start raising much more Hell. Patience has gotten us little. Here are some highlight's from David's post which is a wonderful call to a new activism:
*
Today I write more from my gut than maybe you have ever heard. Quite honestly to all those who have found my words inciting in the past, just move on. You are not going to be happy this morning reading further. After a very restless night of sleep and some deep thought, I am ready to share with you some thoughts (this might not be my most 'smooth' writing). Forgive me that it has taken a while for me to compose myself so that I can write from my values and principles and not anger.
*
First and foremost, Enough! We have poured over $100,000,000 in the last two years into efforts where Americans feel it is there obligation to vote on our freedom. The entire concept is repugnant and disgusting. That we for the last three decades have been drawn into this game of 'this is politics' and fighting these ballot box horrors so that maybe by in five, ten or twenty years we will have enough victories to force our federal government to protect our freedom is simply not acceptable anymore.
*
Second, call this campaign against us what it is - Gay Apartheid. Refuse to allow any of our fellow Americans, President Obama or our allies to view this as a political issue who time hasn't quite come. America is in the process of creating a system of Gay Apartheid. We will not quietly sit and accept it. All over the place, this nation is creating one set of laws for LGBT Americans and another set for all other Americans. That is the classic definition of Apartheid. Either our political allies are for Gay Apartheid or against it. If they are against it, they must fight with us and no longer duck like President Obama did in Maine and Washington. There is no half way in fighting Apartheid. . . . We will accept no compromises, time-lines, incremental approaches with our freedom. Don't counsel patience as if this is a new issue. We have been fighting these ballot box bigots for over three decades. Enough.
*
President Obama standing on the sidelines in Maine and Washington was appalling. The failure of our national organizations and leaders to demand his involvement was equally appalling. The outrageous act of the Democratic National Committee sending an email into Maine asking Maine Democrats to call into "NEW JERSEY" instead of to support the fight against bigotry was unbelievable. No one gets to sit on the sidelines in an epic battle against apartheid and no one gets a free pass. If you want our support, you have to earn it.
*
Finally, yes, as a community we have every reason to be proud. We raised the money, we made the calls, we came not in anger and we made the case. My hats off to the brave people, gay and straight, of Maine and Washington who fought in the trenches. . . it is no longer acceptable to be viewed as brave, patient warriors in defeat.
*
The other thing that we need to do is cease all monetary contributions to HRC and similar self-anointed "leaders" of the GLBT community until such time as they will start to play hardball and stop giving political cover to those who in the final analysis will simply continue to use us and throw us a few crumbs to keep us quiet. If these organizations will not put on brass knuckles and REALLY fight for all of our community - not just the fundraiser cocktail party and dinner crowd - then we need to stop enabling them to give comfort to our tacit oppressors.
Posted by Michael-in-Norfolk at Wednesday, November 04, 2009