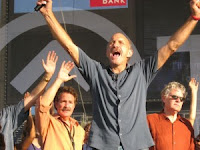 Does gay marriage challenge the credibility of Christianity? That's the conclusion of journalist/blogger Karen Ocamb and I have to agree with her for a number of reasons. First, and foremost from my perspective, if homosexuality is not a sin and is, in fact, a normal and natural condition for a percentage of the population, then the Bible passages cited by the anti-gay haters as justification for condemning same sex relations are called into question. And if these passages are untrue, then what else in the Bible mindlessly accepted as literally true may be false? This situation begins an unraveling of the house of cards belief system of most homophobes - who in actuality have a very weak faith - terrifies the Hell out of these folks. Indeed, it has the potential to demolish their entire "world view" and forces them to question if their form of Christianity is untrue. Second, and this is what Karen focuses on in her column, the lies and tactics and the viciousness and hate of the anti-gay forces represent the antithesis of what is generally regarded as true Christian behavior. If this is the face of Christianity, then who wants it. It betrays the essence of the Gospel message. Here are some highlights from Karen's column:
*
[I]t’s time to call out the “Devil” cleverly disguised as the antigay forces of the Religious Right. This loss [in Maine] isn’t just about politics – it’s about the very soul of the Christian religion. For who but the silver-tongued Devil could convince quietly religious people to believe in – and act on – lies and cheap-trick illusions that twist love into a political perversion?
*
And that’s what happened in Maine – just as it happened in California – where Religious Right professionals manipulated voters into taking away the secular civil rights of a group of people based on the fear of something that MIGHT happen – something made up, a lie based on bigotry and myth.
*
When did it become OK to lie, to pervert the truth to serve God? Surely, if there is a Devil, a Satan, he is chuckling to himself at this greatest handiwork – using political strategy to make hate a virtue and love something to be scorned and punished. Indeed, the normalization of lying, political manipulation and antigay hatred is the latest blow to the legitimacy of religious institutions and Christianity itself.
*
How can one believe in religious truth-telling if antigay ministers are caught in sex scandals, or evangelical Christians like The Family protect their antigay politicians from scandals over adultery or the Catholic Church that famously covered up its own child sex abuse scandals – has the Portland Diocese choose to close its own local parishes while pouring thousands of dollars into the antigay marriage ballot initiative in Maine based on the lie that gay sex would be taught to school children?
*
And what would the Jesus of the New Testament say to all this new religious culture of political arrogance and lies and hate – the very characteristics associated with evil after his crucifixion? If Jesus stood for love – then the caretakers of his Christianity must also stand for love – the kind of love these battles for marriage equality are all about. Not just in their hearts and prayers but in the pulpits and on their feet in the street with us, protesting the stealing of their religion. This is their challenge – and this must become their mission. For if they participate in the conspiracy of silence – like many did as gay men laying dying of AIDS – if they ignore the love, the soul of their calling – they will lose their very meaning.
Posted by Michael-in-Norfolk at Thursday, November 05, 2009