Who Is at Fault for LGBT Losses? 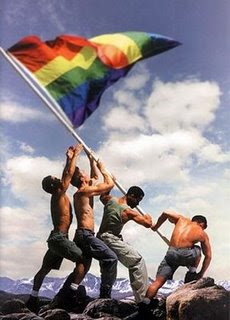 Besides our fair weather friends in the Democratic Party, others bear responsibility for the loss in Maine and other areas where anti-gay politicians were elected yesterday. And to see who that is, many of us need to look in the mirror. I'm as guilty as any given all the years I lived in the closet trying to be something that I wasn't and listening to the foul anti-gay message disseminated by the Roman Catholic Church. While I am trying to make up for my past omissions, I still can only have but so much condemnation for others who are still doing what I did or for those living their lives only partly out of the closet. As Christine Quinn said at the National Equality March, it is hard for politicians and other voters who will have to look you in the face to vote for bigotry and inequality like a slim majority did in Maine yesterday. The more that all of us live out and openly as who we are and do not hide our relationships, the sooner we can achieve full citizenship. Yes, living out and openly can be scary and even dangerous at times. But the alternative is to keep living in fear and to keep being treated as less than fully human and to have our committed relationships treated as garbage. That is no way to live one's life. I did it for years and I will never do it again - never ever. Pam Spaulding has some similar reflections. Here are some highlights:
*
[I]t's always the first inclination to place the blame at someone's door. The fact is that Protect Maine Equality/No On 1 did everything right, had a voter base they thought could be swayed by making gay families visible, straight allies present, and putting boots on the ground. And it didn't work. I think overall, Maine may just not have been winnable, because we understimate the power of cultural intransigence in accepting civil equality when it comes to LGBTs and marriage.
*
What we all have to do is take a look in the mirror to see what needs to happen to change this -- come out of the closet, live out of the closet, be who you are - a neighbor, co-worker and friend claiming your personal equality as their peer, and to be willing to be sacrifice the comfort of the closet rather than point fingers at gay orgs, the President, Congress, the voting homophobes. As long as our numbers remain artificially small because of that closet, we will fail.
*
One lesson is that LGBTs and allies must be visible, particularly to their lawmakers, at every level. As I've asked many times on the Blend, why is it we can draw thousands to a Pride Day, but only muster 200 to lobby their lawmakers face-to-face. Our priorities are screwed.
*
Without all of our allies out of the closet -- those in elected positions, those with access, and those whose voices are forces to be reckoned with, we'll continue to see the unthinkable -- unconstitutional mob rule over the civil rights of a minority group. Really, some allies may simply following the President's lead -- he was so uninterested in what was going on that he claimed not to watch the election returns. With civil rights on the ballot. What does that tell you about commitment, if you're a potential ally thinking "what can I do to help?" if the POTUS is so casual about the outcome.
*
But the fact is that we must not only gaze in the mirror and assess what we can each do personally to advance equality -- the gAyTM needs to close to stop the enabling. Unfortunately it seems to be one of the only ways to signal there's a problem with the lack of support from purported political allies and organizations. . . . We're definitely not on the same page, that's for sure. Otherwise we wouldn't hear the variations on "just wait until ___ occurs (midterm elections, Obama's [presumed] re-election, pick some BS of the day), we'll come back for you." That's counter-productive action in the name of "strategy" that hurts civil equality progress rather than helps.
*
I truly hope that more in the GLBT community - as well as our friends and families - will get outraged enough to send a resounding message all the way to the White House, U.S. Congress and U.S. Supreme Court that more of the same is unacceptable and that we are not going to be the docile "house gays" any longer.
Posted by Michael-in-Norfolk at Wednesday, November 04, 2009

Email ThisBlogThis!Share to TwitterShare to FacebookShare to Pinterest
Labels: Barack Obama, coming out, Coming Out at Work, U. S. Congress, U.S. Supreme Court

How ironic, isn't, those comments from Pam, given the fact she has subscribed to a pick and choose ideology when it comes to the evils of being in the closet.

This campaign was lost because of cafeteria homo's and morons like being scared into the closet.

I can't argue with any of this post. But dear Michael, I cannot blame you in any way for once being in the closet. You're out now, and that's courageous. On the other hand, I can and do blame "the church" for the poor use of scripture that seems to allow no critical interpretation. For that, I am responsible, and I'm sorry. It's a matter of badly needed education in the church, and courageous church leaders who will risk bringing new understanding. We need ALL these parts.