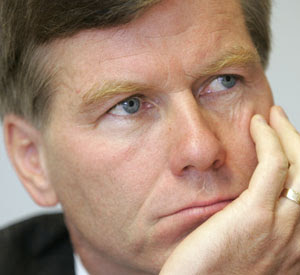 Fighting the urge to vomit, I watched Creigh Deeds concede to Taliban Bob McDonnell (Pat Robertson's anointed candidate) - pictured above - in the race for Virginia's next governor. Obviously, there are a number of lessons to be learned from Deeds' defeat, including (1) the Democrats need to avoid contested primaries that allow the GOP opposition months of additional campaigning unopposed, (2) Virginia voters are too stupid to discern a slick but completely disingenuous and dishonest campaign by far right cultural warriors like McDonnell, (3) candidates from Southwest Virginia are DOA in a statewide general election, (4) Deeds ran one of the worse campaigns in memory and dragged the rest of the Democrat ticket down with him, and (5) Barack Obama and the Congressional Democrats' inability to pass major legislation even when given a mandate suggests to many - at least in Virginia - that a vote for Democrats is a vote for contemplating one's navel rather than getting the job done.
*
The next four years will be interesting as McDonald must govern as opposed to take pot shots at the Democrats and bear the consequences of failing to deliver on his campaign promises such as fix the state's transportation system nightmare and being a "jobs governor" even though his election has told progressives that Virginia is a state to be avoided. And, should the batshit crazy Ken Cuccinelli win the race for attorney general - which looks like a possibility - the voters in Virginia will get the chance to see a true religious fanatic in office (assuming, of course Cuccinelli doesn't do something to get himself removed from office).
*
I would also encourage all who are confronted with being relocated to Virginia or who find their companies courted to move to Virginia to say "Hell No" and tell your employers or the Virginia economic development agencies that an anti-gay state is not attractive and other options are preferable. Legalized bigotry must be made to bear a high price and that price must be made known to policy makers.
Posted by Michael-in-Norfolk at Tuesday, November 03, 2009

This is disgusting. And I just saw this from Eric Cantor on Twitter:

Just spoke at Victory Rally. "Let the word be heard far and wide that the Republican resurgence begins tonight, here in Virginia!"

I couldn't let that message stand uncontested so I wrote him these two responses:

There can only be celebration if the GOP decides to speak for EVERYONE & their rights, not just those of rich white Xtian men.

It's commonly known that VA governorship changes to opposite of POTUS party in off year elections. That's hardly a mandate.

I can say unreservedly that I hate the GOP. I really do. This is a step backwards and it will undo much that has been done to give everyone access to equality.

Lets see..what would be interesting in next four years...