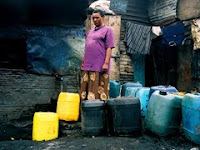 The Uganda Parliament has taken up consideration of a bill that no doubt would be a dream bill for Bob McDonnell, GOP candidate for governor of Virginia, Pat Robertson and The Family Foundation, Daddy Dobson's Virginia affiliate. Besides ending free speech, the bill would impose life sentences and even the death penalty in some cases on homosexuals. Never mind that Uganda is a hell hole with many far more pressing legislative and economic needs. Persecute the gays to change the topic. The bill represents religious based fanacticsm run wild and is the type of measure many extreme Christianists would love to see reapplied in the USA even if the don't come right out and say so. One can only hope that the bill does not pass into law, but given the anti-gay hysteria being whipped up by false Christians, that may be a futile hope. Here are some highlights from Box Turtle Bulletin:
*
Uganda’s Parliament took up the new Anti-Homosexuality Bill of 2009 today, giving the bill its first reading. Bills undergo three readings before becoming law. BTB previewed the bill last month when we received a surreptitious copy dated April 20. According to the pro-government New Vision newspaper, the bill appears unchanged from the earlier draft:
*
Aggravated homosexuality will be punished by death, according to a new bill tabled in Parliament yesterday. …A person commits aggravated homosexuality when the victim is a person with disability or below the age of 18, or when the offender is HIV-positive. The bill thus equates aggravated homosexuality to aggravated defilement among people of different sexes, which also carries the death sentence.
*
The Bill, entitled the Anti-Homosexuality Bill 2009, also states that anyone who commits the offence of homosexuality will be liable to life imprisonment.
*
The bill also proposes stiff sentences for people promoting homosexuality. They risk a fine of sh100m or prison sentences of five to seven years. This applies to people who produce, publish or distribute pornographic material for purposes of promoting homosexuality, fund or sponsor homosexuality.
*
The bill’s language prohibiting “promoting homosexuality” does not restrict itself to “pornographic material.” That is an invetion of the New Vision reporter, who equates anything advocating on behalf of LGBT people as pornographic. Instead, the bill addresses anyone invloved in the “production, trafficking, procuring, marketing, broadcasting, disseminating, publishing homosexual materials,” or “who acts as an accomplice or attempts to legitimize or in any way abets homosexuality and related practices.”
*
The bill also adds an unusual extraterritorial jurisdiction for those who are Ugandan citizens but who engage in same-sex relationships or LGBT advocacy overseas.
*
Once again, religious shows its face as a great evil.
Posted by Michael-in-Norfolk at Thursday, October 15, 2009