Second Thoughts in Battle for Virginia 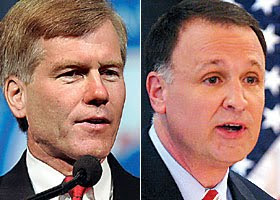 As a political junkie, the 2009 statewide races in Virginia are enough to drive one to distraction. Creigh Deeds, who somehow surged to win the primary to run for governor in June, seems to be an anchor that is dragging down the entire Democrat statewide ticket. His opponent, Taliban Bob McDonnell, is any progressive voter's worse nightmare and the GOP candidate for attorney general, Ken Cuccinelli, is so crazy that he ought to be a regular columnist for World Net Daily. Yet likely voters do not seem to understand the extremism of the GOP ticket and Democrats in Virginia remain demoralized - largely, in my view, because Obama and the national Democrats have delivered on none of the soaring campaign promises. Worse yet, Obama seems unwilling to do anything of substance to get out the black vote which could tip the race to the Democrats. It's enough to make one want to scream. Here are highlights from a New York Times story on the ongoing Virginia debacle:
*
When State Senator R. Creigh Deeds defeated Terry McAuliffe, the former Democratic Party chairman and confidante of Bill and Hillary Rodham Clinton, to be the Democratic nominee for governor of Virginia, the argument among many Democrats was that Mr. Deeds — an easy-going, moderate Democrat from rural Virginia — would be the stronger candidate in a general election.
*
But with this closely-watched election less than a month away, and Mr. Deeds struggling against Robert McDonnell, the Republican former attorney general, it is hard not to forgive some Virginia Democrats for thinking that they might have been better off with Mr. McAuliffe at the top of the ticket. This is no small thing since a defeat for Democrats in Virginia would be a decided setback for this White House, particularly after President Obama became the first Democratic presidential candidate to win the state last year since 1964. Democrats have held the Virginia governor’s seat for eight years.
*
Perhaps the single most politically devastating moment for Mr. Deeds was when he gave a halting and fumbling answer, in a cluster of reporters and television cameras, about whether he would raise taxes to pay for repairing the state’s transportation system. Republicans have used clips from it to produce two of the most devastating advertisements of the campaign, raising questions at once about his views on taxes and his basic candor.
*
Finally, there is money. Republicans are outspending Democrats two-to-one in this race. Mr. McAuliffe came into the race with a huge financial network that he built on the part of the Clintons; and in the unlikely event that his network had not come through for him, he had enough of a private fortune that he would have been able to help himself.
*
While hypotheticals are difficult, Mr. Holsworth suggested that for all the problems Mr. McAuliffe might have, this would have been a very different fall in Virginia if Mr. McAuliffe were the candidate. “McAuliffe would have relished this kind of campaign,” he said. “It would have been a clear contrast with McDonnell, he would have relished making these contrasts, and he is far more a person who enjoys the rough and tumble of a campaign. And none of that is evident in the Deeds campaign.”
*
Deeds symbolizes the fact that what sells in Southwest Virginia from where he hails is something very different from what sells statewide in a race for governor. The Democrats need to remember this. The last Democrat from that region to run for governor was Mary Sue Terry and she lost badly. Jerry Kilgore, the GOP candidate who lost to Tim Kaine likewise was from Southwest Virginia. Like it or not, Southwest Virginia is no longer main stream Virginia. Both parties need to figure that out. Meanwhile, some real help from Obama with the black vote would be more than a little helpful. But like on the issue of gay rights, action is something unknown to Obama.
Posted by Michael-in-Norfolk at Tuesday, October 13, 2009