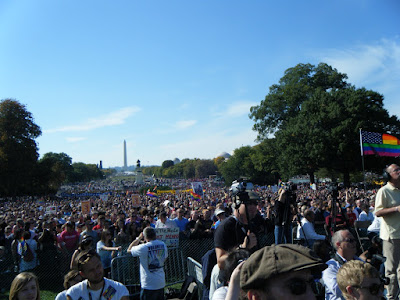 It has been truly a long and utterly amazing day, beginning at 5:00 AM when the alarm went off so that we could meet the buses carry about 100 of us from Hampton Roads to the National Equality March in Washington, D.C. (many more from the area went up prior to today). The boyfriend and I did the entire march route slightly ahead of the huge main body of marchers, including the block right past the White House where the photo at the bottom of this post was taken. Along the route we were interviewed by CBS News - I have no idea if the footage was used or not- as we walked down the center of Pennsylvania Avenue seeking to arrive at the Capitol ahead of the massive crowd so that I could secure my press credentials. I have yet to see an estimate of the numbers, but it was a very, very large crowd.
*
Sadly, from the few sites I have checked since arriving home, it seems Obama - through unnamed sources, of course - is having a hissy fit and John Harwood at NBC News stated:
*
For a sign of how seriously the White House does or doesn't take this opposition, one adviser told me those bloggers need to take off the pajamas, get dressed, and realize that governing a closely divided country is complicated and difficult.
*
Hmm - the same bloggers who helped get his sorry ass elected and this is the attitude? If Obama thinks it is difficult to govern now, wait until 95% of LGBT citizens take their money and votes away from Obama and the Democrats. Frankly, what is the point of supporting politicans if they do nothing for your equality under the law. Something supposedly guaranteed by the 14th Amendment to the United States Constitution I might add. If Obama's attitude and behavior continues as it is towards the LGBT community - i.e., nice, meaningless words like at last night's HRC dinner - I would love to see him face a primary challenge come 2012.
*
As for the HRC crowd, today may well have signaled the tipping point where grass roots activists are finally tired of the HRC approach of groveling and begging for whatever political scaps are tossed to it. The crowd today and the messages they heard were VERY clear: no more excuses and no more delays. Andrew Sullivan had an analysis of HRC that I believe is point on:
*
Readers know I've long been highly critical of the Human Rights Campaign, because I believe they get nothing much done, and have been co-opted by the Democratic party establishment, and have sucked resources out of local gay groups and states who really are creating change, and because of their insufferable smugness, eagerness to take credit for work others do, and Rotary Club dinners that often form their only seriously organized activity. . . I do not want to tar with one brush many well-intentioned people working for them or with them. But their leaders are just so passive, weak-kneed and apologetic, you could mistake their balls for a couple of peas.
*
This split in the gay movement is not new - if you saw the movie Milk, you could see the same tension between those who wanted to stand up and fight for equality and those who wanted to offer milquetoast, semi-closeted incrementalism with straight power. . . . This weekend, these two tendencies will collide together in DC. Thousands of gay, lesbian, transgender and straight allies will be descending on this town for a classic march to express anger, commitment and seriousness to equality. At the same time, one thousand wealthy, tuxedoed, Democratic party donors will be at the Washington Hilton for the HRC dinner of dinners (which tend to be fabulous and fucking endless).
*
It will be interesting to see how this all plays out. Personally, I hope the motivated activist who were in Washington today go home, organize and leave HRC on the sidelines. The energy today was palpible and the event and the speeches were incredibly moving, making me almost tear up on occasion. Turning to happier issues, thankfully, as a contributor to Bilerico-DC we accessed the press area immediately to the right front of the stage. Having the equivalent of front row seats we got some amazing photos ranging from David Mixner who first called for the March back in May, Cynthia Nixon, Dan Choi, Dustin Lance Black (in the photo with me below), Julian Bond, Cleve Jones, Michelle Clunie from Queer as Folk, Lady Gaga and many, many more. 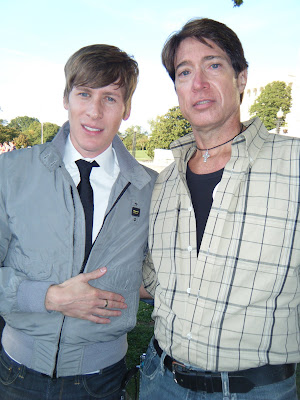 I will post more about our amazing experience tomorrow and over the next few days. The number of great speakers was incredible and I'd like to share my thoughts and impressions on a number of them who delivered thoughtful and provacative calls to activism that hopefully will speep across every congressional district in the nation. The March today is a beginning, not the end and readers need to go to Equality Across America and find a group in your congressional district. If one doesn't exist, then get some friends and start one yourself. Each and every one of us needs to get engaged and DEMAND full equality now. Talk to you members of Congress and state representatives. Beleive me, it is far harder for them to write you off when you are looking them in the face and are no longer some anonymous LGBT theoretical person. If they will not support your cause, then work to elect others who will.
*
Over the nex few days, I'd also like to also share more of the 188 photos the boyfriend took throughout the day. 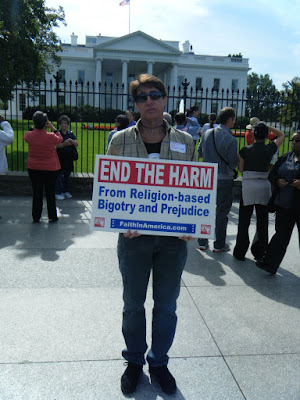 YAY! Glad you were there!

Great post, Michael. I look forward to follow-up ones and to more photos.