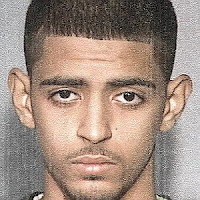 The Christianists and professional Christian set make all kinds of untrue statements about gays and that we are a treat to marriage, the family and/or society. Unfortunately, there are those who listen to such hate filled language and sometimes they act on it, feeling justified in inflicting violence against innocent gays who are no threat to anyone. Other perpetrator of anti-gay violence in my view may also be taking their own self-hating homophobia on others since they cannot come to terms with their own sexuality. If you beat a gay severely or kill them, then naturally, you cannot be one of them - or so I suspect the thinking goes. It is disgusting and it is one of the direct fruits of Christianist anti-gay propaganda. First some highlights concerning an arrest in Florida where an 18 year old is alleged to have beaten a gay man to death via the Miami Herald:
*
An 18-year-old was arrested Tuesday in the beating death of an Oakland Park man, according to the Broward Sheriff's Office. Chad Alexander Olah, who was 17 at the time of the April assault, is being held at the Juvenile Assessment Center on a charge of murder and strong arm robbery in two attacks.
*
Craig Cohen, 47, was beaten in the early hours of April 6 and left on an Oakland Park sidewalk. He was in a coma for months after the attack and died last week. Cohen was gay, but authorities did not charge the attackers with a hate crime, saying he was the victim of a group of drunk attackers looking to beat and rob someone. Olah and two other men had been hanging out at a nearby home, talking about how it'd be fun to rob and beat someone, BSO said.
*
Closer to home, Daniel Rodriguez (pictured above), who authorities say was involved in the savage beating of a Queens, New York man last week, was arrested here in Norfolk, Virginia after apparently fleeing the New York area. The Virginian Pilot has the following:
*
A second suspect has been arrested in the apparent hate assault that left a 49-year-old New York City gay man in a medically induced coma. Police say 21-year-old Daniel Rodriguez was taken into custody in Norfolk on Tuesday night. Charges are pending and NYPD detectives are in the process of returning him to New York. Rodriguez waived extradition in Norfolk General District Court Wednesday morning, according to an e-mail from the Norfolk Commonwealth's Attorney's Office.
*
Earlier Tuesday, 26-year-old Daniel Aleman was arraigned on a charge of assault as a hate crimes. He faces up to 15 years in prison if convicted. A telephone call to his attorney was not immediately returned. Investigators say the two Queens men taunted Jack Price and yelled anti-gay slurs before punching and kicking him last Thursday after he left a 24-hour deli near his home in Queens. Price suffered a fractured jaw and ribs, the collapse of both of his lungs, and a lacerated spleen.
*
Yes, there are bad seeds everywhere, but it does seem that there has been a spike in anti-gay violence that coincides with all of the Christianist anti-gay propaganda. With the constant message being disseminated that gays are a hazard to marriage, society and civilization itself, it is not surprising that bigots feel they have a licence to harm us and kill us.
Posted by Michael-in-Norfolk at Wednesday, October 14, 2009