Was the National Equality March A Success? It Depends On Who One Asks. 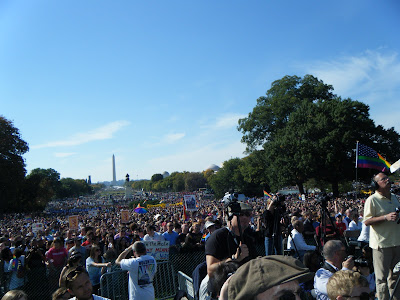 There has been a great deal of sniping going on between proponents of the National Equality March and those who opposed it and/or resented the fact that they could not control it. Some have cynically sought to diminish yesterday's accomplishment while others are seeking to blame the March's organizers for "splitting" the gay rights movement. From my view as a relative new comer to the battle for equality, I believe far too many of the comfortable "insiders" of the gay rights movement have become complacent and, since their lives are not as adversely impacted as those of many others in the LGBT community, are willing for crumbs to be thrown their way. Rex Wockner described the "split" as follows:
*
The praise for Obama inside HRC's fancy dinner and the denunciations of Obama in the streets of D.C. seemed to unequivocally confirm the split that's emerged in the gay community in the aftermath of the passage of Proposition 8 in California. On one side, the grassroots, the netroots, many younger GLBT people and the Stonewall 2.0 folks, who are pissed off, mad as hell and aren't gonna take it anymore. On the other side, the gay activist establishment, which seems to believe that business-as-usual "slow and steady" is still the way to go.
*
For background, I concede that I am by no means a part of the "gay activist establishment." I did not come out until age 49 and when I did, I was forced from my law firm which did not want an openly gay partner. Under Virginia law, my treatment was perfectly legal. That experience was followed by a horrific divorce in a legal system where homophobic judges can financially crucify gay spouses with no fear of recourse against them. I know only too well what many other LGBT Americans experience because we are not allowed fully equal protection under the civil laws. Admittedly, my move into activism was quite by accident. It began when I helped Wayne Besen "out" Jerry Falwell's protege and national "ex-gay," Michael Johnston. That experience was followed by my giving Mike Rogers the information needed to start the process of outing former Congressman Ed Schrock. Subsequently, having decided that I wanted to make a difference, I helped found Virginia's only affiliate of the NGLCC. In addition, I have been on the committee for Equality Virginia's Legends Gala for the last four years and co-chaired the event last year.
*
From this short education and my political activities before coming out, I believe I have a perspective that the jaded, comfortable insiders of the activist establishment lack. And from my perspective, I think that those condemning and ridiculing the March as meaningless and unsuccessful are missing other very real and relevant meanings of "success."
*
I traveled to the March yesterday with about 100 individuals from the Hampton Roads area of Virginia by bus (many others traveled by car and made a weekend of the event). The majority of those attending the March had NEVER been engaged in a protest/demonstration of this type. And that includes my partner/husband. Moreover, half of the people I traveled with appeared to be under age 25. They were highly energized by the March and returned home excited and MUCH more likely to get truly involved in the push for legal equality than ever before. To me, that is a "success." I suspect the same thing happened many times over with the groups I saw at the March from many other states across the nation.
*
Those living in Washington, D.C., Los Angeles, New York City, and other much more LGBT friendly areas - where LGBT people actually have some legal protections unlike we here in Virginia - fail to assess at times how depressing and demoralizing it can be living in a red state. States where - as in Virginia - despite the valiant efforts of local and state LGBT activists little or nothing positive has come to fruition on the civil equality front. In fact, in Virginia, other than the Lawrence v. Texas decision striking down the sodomy laws, things are now worse for LGBT Virginians in terms of civil legal equality than when I came out in late 2001. Indeed, many of us Virginia activists get utterly demoralized at times. I and others like me found the March reinvigorating as did a number of the older set in the group I traveled with. That DOES count for something significant. Hope is the fuel to keep the struggle moving forward. That too is "success."
*
"Success' also includes showing LGBT Americans living in "enemy territory" (or "behind enemy lines" as one of yesterday's speakers called it) that they are NOT alone. Demonstrating that there are many of us who are pushing and will continue to push the envelop for real action can make or break a person's spirits. There are huge numbers of us outside the world of the comfortable, self-congratulatory crowd at HRC who value access to power for themselves more than action that benefits ALL of us. Giving others that sense of not being alone and perhaps even disseminating a bit of hope to isolated LGBT citizens is also "success."
*
I fully realize that yesterday was just a beginning. A fact recognized over and over again at the rally on the west lawn of the Capitol. What we all need to do now is follow up on the Equality Across America mission to organize in EVERY Congressional district and not take "no"or "be patient" for the acceptable response of our elected officials. When that happens and the LGBT community can better pressure passage of ENDA, and the repeal of DADT and DOMA, then the March will have been a "success" on yet another scale.
Posted by Michael-in-Norfolk at Monday, October 12, 2009