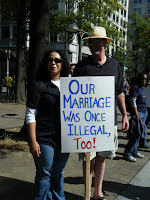 Forty some years after the U.S. Supreme Court decision in Loving v. Virginia, and this kind of crap is still happening. It is frightening, but it is consistent with the reactionary and anti-modernity mindset so common across the Bible Belt in the Deep South - which in my view includes very large portions of Virginia. The irony is that it's people like this jack ass justice of the peace who create the climate where bi-racial children need to worry about facing discrimination in the first place. It goes without saying that this guy needs to be fired immediately and I hope someone looks into what other bigotry may be going on in Tangipahoa Parish, located on the other side of Lake Ponchitrain from New Orleans. There are definitely times I wonder if some people - think professional Christian set - will ever wake up to the fact that even though we may be different, we are all fully human. Here are some highlights from Yahoo News:
*
NEW ORLEANS – A Louisiana justice of the peace said he refused to issue a marriage license to an interracial couple out of concern for any children the couple might have. Keith Bardwell, justice of the peace in Tangipahoa Parish, says it is his experience that most interracial marriages do not last long.
*
"I'm not a racist. I just don't believe in mixing the races that way," Bardwell told the Associated Press on Thursday. "I have piles and piles of black friends. They come to my home, I marry them, they use my bathroom. I treat them just like everyone else." Bardwell said he asks everyone who calls about marriage if they are a mixed race couple. If they are, he does not marry them, he said.
*
Bardwell said he has discussed the topic with blacks and whites, along with witnessing some interracial marriages. He came to the conclusion that most of black society does not readily accept offspring of such relationships, and neither does white society, he said. "There is a problem with both groups accepting a child from such a marriage," Bardwell said. "I think those children suffer and I won't help put them through it." If he did an interracial marriage for one couple, he must do the same for all, he said.
*
"It is really astonishing and disappointing to see this come up in 2009," said American Civil Liberties Union of Louisiana attorney Katie Schwartzmann. She said the Supreme Court ruled in 1967 "that the government cannot tell people who they can and cannot marry."
*
The ACLU sent a letter to the Louisiana Judiciary Committee, which oversees the state justices of the peace, asking them to investigate Bardwell and recommending "the most severe sanctions available, because such blatant bigotry poses a substantial threat of serious harm to the administration of justice." "He knew he was breaking the law, but continued to do it," Schwartzmann said.
*
Is this the kind of backward thinking path Virginia is headed down if the GOP Christian Taliban candidates win next month? It is something people ought to be asking themselves in Northern Virginia and the larger cities.
Posted by Michael-in-Norfolk at Friday, October 16, 2009

There is no need to back track on this country's racist past...we are having trouble with marrying the gays nowadays...lets stay focused.