Obama's Speech gets an "F" 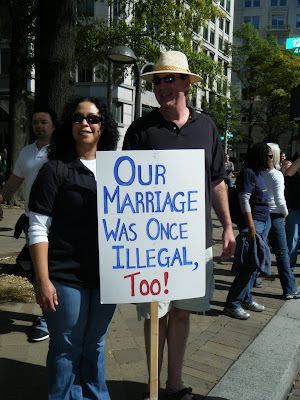 We spent most of the day yesterday afternoon will members of the Washington Blade staff in the press area, but I had not had an opportunity to see Kevin Naff's editorial on Obama's speech on Saturday night until this morning. Kevin gives Obama a failing grade and rightly so in my view. Besides providing no time table whatsoever as to when this "fierce advocate" might push for enactment of long over due legislative action, Obama was silent on matters that he could have mentioned and where he could have condemned today's equivalent of the segregationists of old. So yet again, more pretty words and ZERO action. Here are some highlights from Kevin's column:
*
President Obama gets an "F" for his speech tonight on gay rights. This wasn't so much a policy speech as a recitation of old campaign promises reheated for a breathless audience on its feet. I'm glad I skipped it and stayed home. There was no mention of the fight in Maine to preserve marriage rights, which were enacted by a democratic vote of the state legislature. This omission was not an accident -- Democrats like Obama are desperate to distance themselves from the marriage issue. Obama's silence on the Maine struggle is inexcusable, yet perfectly consistent with his silence on California's Prop 8 fight, which could have benefitted greatly from his involvement.
*
There were no timelines for advancing any of the LGBT-related bills pending in Congress and no promises to use the bully pulpit to push Congress to act on any of them. The audience blindly jumped to its feet when Obama invoked the House passage of the hate crimes act. But Obama conveniently omitted mention of the fact that it passed as an amendment to the Defense authorization bill, not as a standalone bill.
*
We have heard all of this before from Obama during the campaign -- he supports us, he will sign certain bills. He can crack jokes about Lady Gaga. But what we are lacking is that "fierce advocate" he promised to be. No timetables. No words of support for those fighting in Maine. And no news. We've heard this speech before and nearly a year into his administration, nothing has changed.
*
As for the Human Rights Campaign, its president, Joe Solmonese, expects us to wait until 2017 before we judge President Obama's tenure. That's too long to wait for LGBT members of our military being expelled. That's too long to wait for those being fired from their jobs for being gay. That's too long to wait for couples being financially destroyed because our relationships are deemed inferior to those of our staight counterparts. That's too long to wait for me and it should be too long to wait for you and all of us.
Posted by Michael-in-Norfolk at Monday, October 12, 2009

He could have urged the subcommittee chaired by one of its cosponsors to report out H.R. 1283.