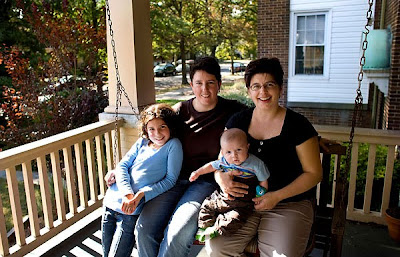 UPDATED: For non-local readers, Mallory Country Club is in reality more of a neighborhood pool that drwas membership from the surrounding neighborhood where Shannon and Martha live. By making the cost twice that for couples, the real individual being punished is their oldest child.
*
This article from the Virginian Pilot involves two friends of mine and their family. In fact, Shannon was one of the co-founders of HRBOR with me and is also one of this year's co-chair for the Equality Virginia Legends event on November 7, 2009, at the Waterside Marriott in Norfolk. With GOP candidate for governor of Virginia, Bob McDonnell, seeking to further roll back what few rights LGBT citizens in Virginia, the story is timely. The further irony is that for heterosexual couples seeking membership in the club, there is no due diligence done to confirm the marital status of couples seeking a family membership. As a result, from what I have heard, there ARE unmarried straight couples who belong to the club under a family membership. Thus, same sex couples are singled out for different treatment. The article is a window of the backward thinking so prevalent in this area. Even worse are some of the Christianist comments to the story. These people are only too happy to punish children for the perceived sins of their parents. It is beyond sick. Here are some highlights:
*
Shannon Bowman and Martha Daas can join the Mallory Country Club, but not as a family. That's a problem for the two women, who united in what they consider a wedding more than two years ago, live under the same roof and are raising two children together.
*
As a married couple, they would pay $1,000 to join the club and an annual rate of $630, said Lynn Tiedge, a club member. That's the same amount an individual pays to be in the club in West Ghent, Tiedge said. As Bowman and Daas see it, they are being asked to pay double the rate a married couple pays. Though Virginia law does not allow same-sex couples to wed, the women consider themselves married and would legally marry in the state if they could, they said.
*
"It's not the money issue," Bowman said. "It's the principal point that we're not accepted as a family." If a vote taken by Mallory Country Club members is any indication, the fact that the family rate is not extended to cohabiting gay couples who are raising children is a concern of many members too. For them, it's not enough that gay people can join the club as individuals. About 180 votes were cast to support family memberships for same-sex couples with children, according to the club's Web site, at www.mallorycountryclub.com. Roughly 126 votes were cast against it.
*
For the measure to pass, a two-thirds favorable vote is required, said Tiedge, who supports the measure and said she worked with at least 15 other club members to revise the club's bylaws to provide for it. Two-thirds of the 311 ballots cast would have been roughly 207 votes.
*
Numerous club members contacted for this story did not return calls or did not want to comment publicly. It's not the first time this issue has surfaced at the club. In 2004, a similar measure was voted on by members and narrowly failed. The most recent efforts to change how the club charges same-sex couples with children living under one roof were launched earlier this year after Bowman, Daas and another same-sex couple with children tried to purchase a membership under the family rate, Tiedge said.
*
Joseph George, a member of Mallory Country Club for about 40 years, voted against changing its practice. "I was not in favor of changing the bylaws to give homosexuals a preference when these people have every opportunity to have one of the members join the pool," George said. He said the other partner in the gay couple could have been designated a baby-sitter and brought the child to the pool "all along." Jim Farrell, Mallory Country Club president, would not elaborate on the issue.
*
This type of religious based bigotry is symptomatic of why this area remains a relative backwater in terms of attracting first class progressive businesses. Low taxes are NOT the only thing companies look at when the consider relocating.
Posted by Michael-in-Norfolk at Thursday, October 15, 2009