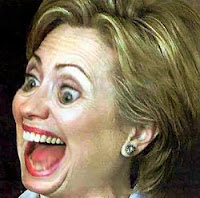 I have to agree with the assessment of Jeffrey Toobin over at Huffington Post, namely that Hillary's refusal to concede and admit that she has lost the race for the Democratic Party nomination is clearly evidence that Akasha has perhaps gone over the edge and had a mental break down. She's beginning to make the Chimperator look like he's in touch with reality. Hillary seems to be living in some parallel reality of her own creation. She's starting to be down right scary in her insanity. I agree with John Aravosis and others that Nancy Pelosi and other senior leadership in the Party need to act to ship Hillary off to a rest home for some serious mental health counseling. Here are Toobin's comment and those of some other network commentators:
*
Political analyst Jeffrey Toobin called Hillary Clinton's refusal to concede the election "deranged narcissism."
*
"Well whatever that was, it wasn't a concession speech." -- FNC's Hume
*
"If I were Barack Obama, if I heard that speech, I would not be very happy. ... They are living in parallel universes right now." -- CNN's Borger.
*
"This was a defiant speech, against all the kind of advice that [heavyweights] within the Democratic Party gave her" -- Ex-WH adviser David Gergen, on whether he was surprised by Clinton's speech (CNN).
*
"She did everything but offer Obama the vice presidency" -- GOP strategist Alex Castellanos (CNN)
Posted by Michael-in-Norfolk at Wednesday, June 04, 2008