Unfit for the Judiciary 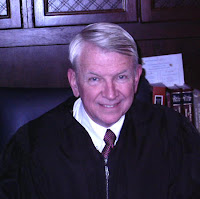 Oklahoma sure seems to have more than its share of bigoted hate-merchants in political office and/or judicial positions, particularly the Oklahoma City area, based on the reletively recent anti-gay verbal diarrhea of state legislator, Sally Kern, and now District Judge, Bill Graves. Neither Kern nor Graves seem to understand that THEIR religious beliefs do not override the CIVIL laws. They are to adiminster the CIVIL laws, not some religious court of Star Chamber. Judge Graves has his panties in a serious wad over the proposal to amend the Oklahoma rules of judicial conduct to prevent judicial discrimination based on sexual orientation, gender and ethnicity. While I concede that it is surprising, EVEN VIRGINIA - certainly not one of the more progressive states - requires that judges cannot be biased in performing their judicial duties based on litigants' sexual orientation.
*
Mr. Graves has confirmed the depths of his bigotry not only against gays but also Hispanics and I suspect anyone who is not white in a letter that can be found here. In his tirade, Graves also shows his ignorance of the law when he cites the Oklahoma "crimes against nature" statute, 21. Oklahoma Statutes Sec. 886, ignoring the fact that the U. S. Supreme Court struck down the remaining sodomy statutes FIVE YEARS AGO in its ruling in Lawrence v. Texas. Mr. Graves also apparently has never heard of the concept of equal protection under the law as required by the 14th Amendment to the U. S. Constitution. In short, Mr. Graves demonstrates that he cannot impartially apply the law and, therefore, should not be on the bench. Here are select highlights from his rant which evidence the typical Christianist approach of equating being gay with being a pedophile and/or diseased:
*
"Sexual orientation" would include pedophiles and polgamists. Does the BBC desire to protect such activity? Homosexuals practice anal sodom, defined as "the detestable and abominable crime against nature" at 21 O.S. Sec. 886, which no doubt has contributed greatly to the AIDS plague. Does the BBC desire to promote this practice?
*
By including the term "ethnicity," would a judge be barred from questioning whether a person with no social security card is an illegal alien? If not, would it be "invidious discrimination" to report this to the ICE for deportation of such person? Rule 3.6 would also prohibit a judge from honoring his or her religious beliefs against homosexuality since there are numerous Biblical references condemning homosexuality. Even many non-Christian atheists object to the homosexual agenda.
*
All I can say is God help any litigant or criminal defendant who is non-white and/or a sexual minority that has the severe misfortune of having to appear in Judge Graves' coutroom. Based on his own statements, it is a foregone conclusion that they will not receive an impartial dispensation of justice from this bigot, who can be reached at: Oklahoma County Courthouse, 321 Park Avenue, Oklahoma City OK 73102 , (405) 713-1456.
Posted by Michael-in-Norfolk at Thursday, June 05, 2008