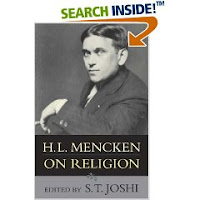 Although he quotes Mencken in a different context (i.e., the demands of Islamic fundamentalist against Danish citizens), Bob Felton at Civil Commotion has a quote from H. L. Mencken that wondefully describes people like Rick Scarborough and Tony Perkins mentioned in the prior post and those like them who seek to inflict their religious beliefs on all of society. (I am assuming Scarborough and Perkins actually believe the religious based bile they put out and are not in it solely for the money they get from mindless Christianist contributors). Here's a portion of the Mencken quote:
*
The way to deal with superstition is not to be polite to it, but to tackle it with all arms, and so rout it, cripple it, and make it forever infamous and ridiculous. . . . True enough, even a superstitious man has certain inalienable rights. He has a right to harbor and indulge his imbecilities as long as he pleases, provided only he does not try to inflict them upon other men by force. He has a right to argue for them as eloquently as he can, in season and out of season. He has a right to teach them to his children. But certainly he has no right to be protected against the free criticism of those who do not hold them. He has no right to demand that they be treated as sacred. He has no right to preach them without challenge.
*
The meaning of religious freedom, I fear, is sometimes greatly misapprehended. It is taken to be a sort of immunity, not merely from governmental control but also from public opinion. A dunderhead gets himself a long-tailed coat, rises behind the sacred desk, and emits such bilge as would gag a Hottentot. Is it to pass unchallenged? If so, then what we have is not religious freedom at all, but the most intolerable and outrageous variety of religious despotism. Any fool, once he is admitted to holy orders, becomes infallible. Any half-wit, by the simple device of ascribing his delusions to revelation, takes on an authority that is denied to all the rest of us.
Posted by Michael-in-Norfolk at Thursday, June 05, 2008