Wow!! I am very happy that the California Supreme Court has both denied the ADF's request that the Court's May 15, 2008, ruling be stayed until after the November, 2008, election and denied the petitions for rehearing. Matt Staver and other theocratic wingnuts will no doubt be blustering and whining and convulsing in fits, disingenuously claiming that the end of western civilization is at hand. Meanwhile, same sex marriages will be able to commence and proceed for four and a half months before election day in November, thus increasing the pressure on the California electorate not to support the Christianist efforts to amend the California constitution. This, combined with what hopefully will be a huge turnout of younger voters supporting Obama on election day, will hopefully be enough to defeat the amendment effort and send the Christianists back into the wilderness politically, at least in California. Here's a copy of the Court's Order: 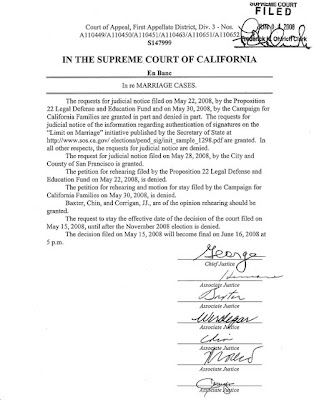