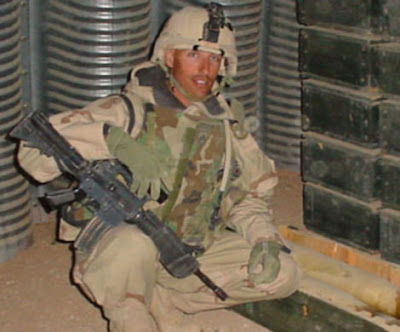 Via Andrew Sullivan's blog I came upon this piece in The Atlantic that looks at the case of Sergeant First Class Paul Ray Smith (pictured above) who was posthumously awarded the Medal of Honor for heroic conduct in Iraq. Unfortunately, the article while deservedly lauding Sergeant Smith, makes no mention of the fact that he died in a war launched based upon the calculated and cynical lies of the Chimperator and Emperor Palpatine Cheney. In my view it is both criminal and a sin that a valiant young man like Sergeant Smith died in a war that should never have been commenced. It is nothing short of disgusting that Laura Bush made the delusional statement that the Chimperator suffers more than anyone over the war he wrongly commenced. Tell that to Sergeant Smith's family and the families of the other Iraq War dead, both American and Iraqi.
*
Perhaps living in an area with many military personnel, such stories hit home much harder than for those not living surrounded by members of the military (my new roommate who will be moving in later this month is, in fact, in the military). Perhaps not, I don't know. In any event, I hope God has a special place in Hell for the Chimperator and Cheney. They are truly uncaring and evil men, in my opinion, who are responsible for who knows how many total deaths in the Iraq War debacle. Here are some story highlights:
*
Over the decades, the Medal of Honor—the highest award for valor—has evolved into the U.S. military equivalent of sainthood. Only eight Medals of Honor have been awarded since the Vietnam War, all posthumously. “You don’t have to die to win it, but it helps,” says Army Colonel Thomas P. Smith. A West Point graduate from the Bronx, Smith has a unique perspective. He was a battalion commander in Iraq when one of his men performed actions that resulted in the Medal of Honor. It was then-Lieutenant Colonel Smith who pushed the paperwork for the award through the Pentagon bureaucracy, a two-year process.
*
On the morning of April 4, 2003, the 11th Engineer Battalion of the Third Infantry Division broke through to Baghdad International Airport. With sporadic fighting all around, Smith’s men began to blow up captured ordnance that was blocking the runways. Nobody had slept, showered, or eaten much for weeks. In the midst of this mayhem, Smith got word that one of his platoon leaders, Sergeant First Class Paul Ray Smith (no relation) of Tampa, Florida, had been killed an hour earlier in a nearby firefight. Before he could react emotionally to the news, he was given another piece of information: that the 33-year-old sergeant had been hit while firing a .50- caliber heavy machine gun mounted on an armored personnel carrier. . . . And a few days after that, other members of the platoon, who had witnessed Sergeant Smith’s last moments, were themselves killed.
*
Sergeant Smith was directing his platoon to lay concertina wire across the corner of a courtyard near the airport, in order to create a temporary holding area for Iraqi prisoners of war. Then he noticed Iraqi troops massing, armed with AK-47s, RPGs, and mortars. Soon, mortar fire had wounded three of his men—the crew of the platoon’s M113A3 armored personnel carrier. A hundred well-armed Iraqis were now firing on his 16-man platoon.
*
Sergeant Smith threw grenades and fired an AT-4, a bazooka-like anti-tank weapon. A Bradley fighting vehicle from another unit managed to hold off the Iraqis for a few minutes, but then inexplicably left (out of ammunition, it would later turn out). Sergeant Smith was now in his rights to withdraw his men from the courtyard. But he rejected that option because it would have threatened American soldiers who were manning a nearby road block and an aid station. Instead, he decided to climb atop the Vietnam-era armored personnel carrier whose crew had been wounded and man the .50- caliber machine gun himself. He asked Private Michael Seaman to go inside the vehicle, and to feed him a box of ammunition whenever the private heard the gun go silent.
*
Seaman, under Sergeant Smith’s direction, moved the armored personnel carrier back a few feet to widen Smith’s field of fire. Sergeant Smith was now completely exposed from the waist up, facing 100 Iraqis firing at him from three directions, including from inside a well-protected sentry post. He methodically raked them, from right to left and back. Three times his gun went silent and three times the private reloaded him, while Sergeant Smith sat exposed to withering fire. He succeeded in breaking the Iraqi attack, killing perhaps dozens of the enemy while going through 400 rounds of ammunition, before being shot in the head.
*
Colonel Smith believes there are other Paul Smiths out there, both in their level of professionalism and in their commitment—each a product of an all-volunteer system now in its fourth decade. How many others have performed as valiantly as Sergeant Smith and not been recommended for the Medal of Honor?
Posted by Michael-in-Norfolk at Wednesday, June 04, 2008