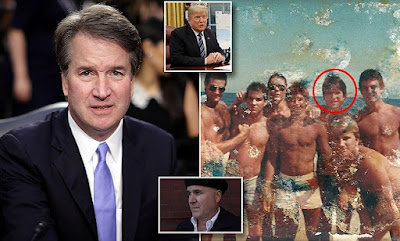 Some on the right are trying to describe the encounter described by Dr. Christine Blasey Ford as mere  "hijinks for boys."  Most of these defenders of Brett Kavanaugh, of course,  make Attila the Hun look like a liberal and are not known for the championing of women's rights.  Please understand, I am no prude nor am I unfamiliar with a privileged youth - I had one of my own and remember the hijinks of my summers at the family "camp" on Brantingham Lake in the Adirondacks with a circle of similarly privileged friends where lots of drinking occurred. That was followed by years of fraternity parties in college, so I do know about partying and drinking perhaps to excess.  But at no time do I recall any attempted sexual assault having occurred.  I also reflect that sometimes too much alcohol reveals who we really are at the core and some display their true feelings about others, especially women.  With Brett Kavanaugh, we are talking about someone who is seeking a life time appointment and a position where he can do untold good or harm.  My concern about the story from long ago is that it shows an underlying lack of concern for others and their rights.  Do we really want someone like that on the Court.  My position is no.  A piece in the Washington Post looks at Mark Judge, one of Kavanaugh's bets buds, through his own writings which suggest that Kavanaugh should not be on the Court.  Here are excerpts:

As Christine Blasey Ford tells it, only one person can offer eyewitness confirmation of her account of a sexual assault by Supreme Court nominee Brett M. Kavanaugh: Mark Judge, Kavanaugh’s friend and classmate at Georgetown Prep. . . . Ford’s legal team has asked the Senate Judiciary Committee to compel Judge to testify.

A review of books, articles and blog posts by Judge — a freelance writer who has shifted among jobs at a record store, substitute teaching, housesitting and most recently at a liquor store — describes an ’80s private-school party scene in which heavy drinking and sexual encounters were standard fare.

Judge wrote about the pledge he and his friends at the all-male school on Rockville Pike in North Bethesda, Md., made to drink 100 kegs of beer before graduation. On their way to that goal, there was a “disastrous” party “at my house where the place was trashed,” Judge wrote in his book “God and Man at Georgetown Prep.” Kavanaugh listed himself in the class yearbook as treasurer of the “100 Kegs or Bust” club.

“I’ll be the first one to defend guys being guys,” Judge wrote in a 2015 article on the website Acculturated. He described a party culture of “drinking and smoking and hooking up.” During senior year, Judge said he and his pals hired a stripper and bought a keg for a bachelor party they threw to honor their school’s music teacher.  “I drank too much and did stupid things,” he said in his memoir.

While many of his classmates moved on to careers in law, politics, business and education, Judge seemed to some friends to stay fixed in the experiences of his adolescence. Over time, his politics shifted from left to right, and his writing often focused on his view of masculinity (“the wonderful beauty of uncontrollable male passion”) and his concern that gay culture was corroding traditional values.

In one column for Acculturated, Judge wrote that it is “important that for some brief moments in his life — preferably when he is young — a man should be, at times, arrogant, a little reckless, and looking for kicks.”

Judge — who did not respond to emails and phone calls requesting comment and who has deleted his Twitter account and taken down videos from YouTube and Vimeo — is a recovering alcoholic who has traveled a rocky road since high school. He took seven years to earn his bachelor’s degree at Catholic University — a delay he attributed to “my fondness for bars and rock and roll.”

Maryland state Sen. Richard S. Madaleno Jr. (D-Montgomery), one of Judge’s classmates at Georgetown Preparatory School, recalled him as “an unhappy person who was happy to make other people unhappy. ‘Bully’ may be an overused term, but he regularly belittled people he perceived as being lower on the high school hierarchy.”

McKee said Judge blew up at him after the rejections. McKee, who is gay, said Judge sent a vituperative email wishing him the same fate as Matthew Shepard, the gay college student who was beaten and left to die in Wyoming in 1998.

“He shows signs of true hatred,” said McKee, now the editor of Landscape Architecture magazine. “It was one of those few kind of showstopping moments at the paper.”  McKee said he forwarded the email to his editor, David Carr, who banned Judge from writing for the paper again.

In 2003, a student named Eric Ruyak reported to school authorities that a Jesuit priest who was a teacher at Georgetown Prep had touched him inappropriately. Some Prep alumni, including Judge, rallied around the teacher, the Rev. Garrett Orr, according to several Prep graduates.

“Numerous alumni told me that Judge was going around saying I was emotionally unstable and a sexual deviant,” Ruyak said Thursday. “He told people that the only reason I wasn’t being expelled was my dad was a powerful lawyer and president of Prep’s board.”

An investigation by Jesuit authorities later confirmed Ruyak’s account. Orr was placed on a leave of absence from his order. When another Prep student later alleged that Orr had sexually abused him, the priest was arrested. He pleaded guilty and was sentenced in 2011 to five years of probation.

“For years, I couldn’t shake Judge,” Ruyak said. “He would write about the case to advance his agenda about the school being a nest of liberalism and homosexuality. This guy did unbelievable damage to me when I was a kid.”

Judge was and is, in my opinion, a total train wreck.  That he was one of Kavanaugh's best friends says - at least to me - a lot about Kavanaugh, none of it good.  Do we wan someone of the Court who counted a bully and misogynist among his closet friends during his formative years?  I for one do not.  Kavanaugh could do unbelievable damage to many Americans.

Posted by Michael-in-Norfolk at Saturday, September 22, 2018

Ugh. Kavanaugh and Judge are the personification of the conservative old boy's club.