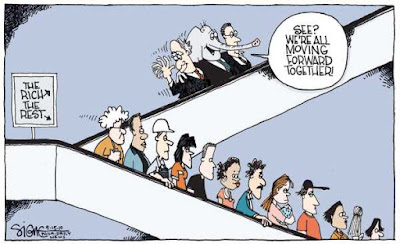 The Republican Party has become a full time insane asylum where both the party base - especially the evangelical Christians - and now the party leadership are utterly unhinged and detached from reality.  The descent to insanity began years ago and, in my view, was sparked by the rise of the Christofascists within the party.  Now it is full blown and the party is beyond saving.  Yet, it is entertaining when on occasion Republicans are hit in the face by reality.  One such instance is the revulsion that most Americans have towards the Trump/GOP tax cut that was supposed to provide a wave for GOP candidates to ride to victory in the 2018 midterm elections.  A GOP poll concluded that by a 2 to 1 margin voters recognize that the tax bill was a massive give away to the very rich and large corporations.  Similarly, independents see the truth of the tax bill by a 36% margin.  A piece in the Washington Post looks at this delicious circumstance.  Here are highlights:

[E]very once in a while, the public will actually figure something out on their own and come to an accurate conclusion about a policy. When this happens, one party or the other is bound to be deeply disappointed that their efforts at mass hornswoggling have failed.

This is the position Republicans now find themselves in, Sahil Kapur and Joshua Green report:

A survey commissioned by the Republican National Committee has led the party to a glum conclusion regarding President Donald Trump’s signature legislative achievement: Voters overwhelmingly believe his tax overhaul helps the wealthy instead of average Americans.

By a 2-to-1 margin — 61 percent to 30 percent — respondents said the law benefits “large corporations and rich Americans” over “middle class families,” according to the survey, which was completed on Sept. 2 by the GOP firm Public Opinion Strategies and obtained by Bloomberg News.

The result was fueled by self-identified independent voters who said by a 36-point margin that large corporations and rich Americans benefit more from the tax law . . .

This information is contained in a slide under the title, “But, we’ve lost the messaging battle on the issue.” Indeed they have — they lost both to the Democrats and to reality.

The reality is not in dispute. Around two-thirds of the benefits of the tax cuts went to those in the top quintile of taxpayers, with about 20 percent of the benefits going to the richest 1 percent. By 2025, when the cuts are fully phased in, the top 1 percent will get 25 percent of the benefits. (See details here.) The centerpiece of the plan, furthermore, was a gigantic corporate tax cut. Republicans promised that this cut would produce a wave of investment and wage increases for workers, but so far the only wave that has resulted is a tsunami of stock buybacks benefiting wealthy shareholders, which is exactly what liberals predicted.

What people do notice, however, is that their paychecks didn’t look much bigger after the tax cut. Maybe they’re getting a few more dollars a week, but it certainly wasn’t life-transforming.

That probably influences perceptions, but I’d contend that where Republicans really lost was not in the fact-checking and media analyses (close as those are to my heart) or even in people’s paychecks, but in the relentless Democratic messaging on this issue. It had the benefit of being 1) easy to understand, 2) consistent with what people already believed about Republicans, and 3) completely true.

So what is the Republican answer to their communication failure?

Republican leaders continue to try to sell the law. They’re planning on holding a floor vote in the House next week for a second phase of tax changes that would make the individual changes permanent. Since it has a slim chance of passing the Senate, the effort is seen as a political messaging tool to remind voters of the cuts and force Democrats to take an uncomfortable vote against tax relief for middle-class Americans.

That is no doubt what Republicans think, but it’s somewhere between questionable and ridiculous. Why would a vote to reinforce an unpopular law do Republicans any favors, and why would Democrats be uncomfortable voting against it?

I think the answer is that Republicans are so deeply committed to cutting taxes that they can’t wrap their heads around the idea that the public doesn’t agree with them. Doesn’t everyone believe taxes are too high? Aren’t tax cuts inherently good? Won’t the party that advocates them always be rewarded?

Well, no. As it happens, Americans have surprisingly nuanced views about taxes. Most people think that the amount they have to pay is fair, which makes it harder to make a direct appeal to self-interest by saying “I’ll cut your taxes!” Most importantly, when you ask people what bothers them about the tax system, the top responses are that corporations and wealthy people aren’t paying their fair share.

So if you’re going to pass a huge tax cut whose benefits go mostly to corporations and the wealthy, it would seem almost inevitable that it won’t be popular. But Republicans were so convinced of the righteousness of their cause that they convinced themselves that the public would simply have to agree with them.


Thank goodness a majority of Americans see the Trump/GOP tax cut for what it is.  I hope they loudly oppose GOP efforts to cut other programs to address budget deficits that they created with their massive give away to the rich.
Posted by Michael-in-Norfolk at Saturday, September 22, 2018

I roll my eyes at all the Rethyglyclowns who believed Cheeto (and Ryan and The Turtle) when they parroted the benefits of the tax cuts. Suckers!!