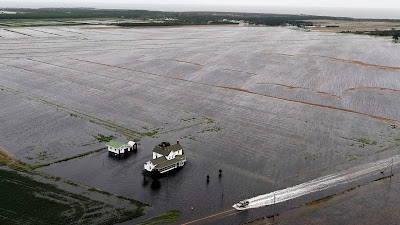 In a post last week I noted how six years ago Republican legislators in North Carolina had rejected the reality of climate change and ignored the recommendations of a non-partisan committee concerning sea level rise and future potential flooding.  The result was more construction on the coastal plain and flood plain areas.  Now, with Hurricane Florence the idiocy of such action is all too apparent.   Meanwhile, the Trump/Pence regime has pulled America out of the Paris climate accord and is actively working to destroy restrictions that would lessen carbon emissions and at least slow down elements fueling climate change.  All pure idiocy that ignores the growing dangers that past foolishness has set in motion.  A column in the Washington Post looks at the new normal and the danger of Trump/Pence policies - the irony, of course, is that North Carolina went for Trump in 2016.  Karma has already slapped the state hard across the face.  Here are column excerpts:

Welcome to the new normal.  Tropical cyclones are nothing new, of course. But climate scientists say that global warming should make such storms wetter, slower and more intense — which is exactly what seems to be happening. And if we fail to act, these kinds of devastating weather events will likely become even more frequent and more severe.

Climate change is a global phenomenon. Authorities in the Philippines are still trying to assess the damage and death toll from Typhoon Mangkhut, a rare Category 5-equivalent storm that struck the archipelago Saturday with sustained winds of 165 mph. Mangkhut went on to batter Hong Kong and now, as it weakens, is plowing across southern China.

Every human being on the planet has a stake in what governments do to limit and adapt to climate change, including leaders who, like President Trump, prefer to believe global warming is some kind of hoax. I doubt the citizens of Wilmington, N.C. — a lovely resort town that was turned into an island by widespread flooding from Florence — feel there is anything illusory about the hardship they’re going through.

The most ambitious attempt to quantify the link between climate and weather — a blue-chip international consortium called World Weather Attribution — has not yet made an attempt to estimate any possible effect that global warming may have had on Florence or Mangkhut. But another group of researchers, the Climate Extremes Modeling Group at the Stony Brook University School of Marine and Atmospheric Sciences, estimated Sept. 12 that Florence would produce 50 percent more rainfall than if human-induced global warming had not occurred.

We know that warmer water is more easily evaporated, which means there is more moisture available to fuel a storm such as Florence or Harvey — and to be released by such storms as rainfall.

If humankind suddenly stopped burning fossil fuels tomorrow, we would still have to adapt to the climatic changes we have already set in motion. . . . . We will be coping with massive tropical storms, tragic coastal and riverine flooding, deadly heat waves and unprecedented wildfires for the rest of our lives.

At the very least, we should be trying to reduce carbon emissions and keep global warming to a manageable level. With the landmark Paris agreement, the nations of the world agreed to try. But Trump foolishly decided to pull the United States — the world’s second-biggest emitter of carbon dioxide, behind only China — out of the deal.

The administration has already proposed weakening restrictions on carbon emissions from automobiles and coal-fired power plants. And last week, there were reports that the administration also wants to loosen rules governing the release of methane, which traps even more heat than carbon dioxide.

Another news item from earlier this month should be instructive: A cargo ship is presently making the journey from Vladivostok, on Russia’s Pacific coast, to the German port of Bremerhaven via the Arctic Ocean, rather than taking the usual southern route through the Suez Canal and the Strait of Gibraltar. Until now, the northern route has always been impassible because it was blocked by polar ice. But because of climate change, a lot of the ice has melted.

Climate change is no longer theoretical. It is real, it is all around us, and it is going to get much worse.

Posted by Michael-in-Norfolk at Tuesday, September 18, 2018