Sex-Abuse Scandal Growing Faster Than the Church Can Contain It 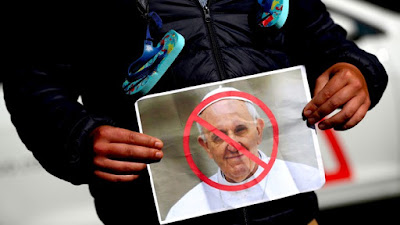 Interestingly, as the sexual misconduct allegations against Brett Kavanaugh are roiling Washington, the Catholic Church sexual abuse scandal is exploding at new levels.  In both instances, the behavior of the alleged predators is part and parcel with a sense of entitlement and being above the law. On the one hand you have rich boy, private prep school boy Brett Kavanaugh and on the other you have priests and bishops - princes of the Church, if you will - who may no longer live in palaces as the once did in France and the United Kingdom where I recently visited, yet who see themselves as free from the rules that bind others.  In the case of the GOP, it has already given Trump a pass on serial cases of sexual harassment.  In the case of the Catholic Church, the Church hierarchy has covered up crimes against  children and youths and for decades, if not centuries.  Now, the Catholic Church is facing a reckoning that has put even Pope Francis in the bull's eye.  A piece in The Atlantic looks at the long overdue accounting facing the Church.  Here are highlights:

As Pope Francis faces mounting pressure to address the spiraling clergy sex-abuse crisis, almost every day has brought some new revelation or declaration.

Since Tuesday alone, a group of American Catholic leaders went to Rome to ask Francis some tough questions, while a women’s open letter demanding answers from him crossed the 45,000-signature mark. The pontiff summoned bishops from around the world to a future meeting, while making one bishop the subject of a new investigation. One cardinal who had come under fire for allegedly enabling accused priests to keep working for the Church announced his plans to resign, while another, who has been pressing for meaningful action against abusers, came under scrutiny himself. Amidst all this, a bombshell report about sex abuse in Germany was leaked to the press.

It does seem like we are reaching a watershed moment.” By Thursday, there had been so many new developments that she said she was having a hard time keeping up—and that the leaders at the Vatican probably were, too.  “I think they’re scrambling. The news is coming on so many fronts. I think they don’t know quite what to do.” Here is some of what they nevertheless did this week.

An American audience with the pope

Church leaders from the U.S. met with the pope in Rome on Thursday. Cardinal Daniel DiNardo, the president of the U.S. Conference of Catholic Bishops, had called for a meeting to discuss allegations against Theodore McCarrick, a former cardinal who served as archbishop of Washington from 2001 to 2006. This summer, McCarrick resigned as cardinal after he was accused of sexual abuse.

But if any concrete decisions came out of the papal meeting, DiNardo did not reveal them.  “I worry that the cardinals are coming home empty-handed. They were listened to, but it’s not clear they’re going to have support from the Vatican in terms of handling the investigation into the McCarrick situation,” Mary Rice Hasson, the director of the Catholic Women’s Forum, a network that aims to amplify the voices of Catholic women, told me Thursday. “The concern doesn’t go away because our cardinals had a nice listening session with Pope Francis. People want action.”

Complicating matters further, on the eve of his meeting with the pope, DiNardo himself was accused of covering up abuse in his Galveston-Houston archdiocese, casting doubt on whether he could effectively lead the U.S. Church’s effort at reform, the Washington Post reported.

Even as DiNardo and other U.S. leaders gathered in Rome on Thursday, the pope accepted the immediate resignation of a West Virginia bishop, Michael J. Bransfield, over allegations that he had sexually harassed adults. Francis also authorized another bishop to investigate the allegations against Bransfield.

A plan for an unprecedented meeting of world bishops

Pope Francis on Wednesday summoned bishops from around the world to a first-of-its-kind meeting in Rome in February. The focus will be on protecting minors, and bishops will reportedly receive training in identifying abuse, intervening, and listening to victims.

The choice to summon the presidents of bishops’ conferences worldwide signals that the Vatican finally recognizes clergy sex abuse is a global problem, according to Cummings, the historian.  . . . In the past, she explained, Church leaders had suggested that the problem was limited to the U.S., but as scandals began to surface elsewhere—from Ireland to Australia to Chile to Germany—that story became impossible to believe.

Stephen Schneck, a former Catholic University professor, likewise told me, “I’ve come to the conclusion that the bishops can’t be trusted to police themselves. I think the ultimate solution, especially here in the U.S., is going to require an active, permanent role for the laity, because of the problem of oversight.”

A study has alleged that more than 3,600 children were sexually abused at the hands of some 1,670 clergy members over the past seven decades in Germany. Commissioned by Church officials and conducted by university researchers, the report was supposed to be released on September 25, but it was leaked to German outlets Spiegel Online and Die Zeit and reported this Wednesday instead.

This study comes on the heels of another bombshell report. Just last month, a 900-page Pennsylvania grand-jury report detailed accusations against about 300 priests and alleged that their actions—which the report said involved more than 1,000 children—were covered up by diocese officials.

A cardinal on the verge of resignation

Cardinal Donald Wuerl, the archbishop of Washington, said Tuesday that he plans to travel to Rome soon, where he will ask the pope to accept his resignation. Wuerl has been heavily criticized after the Pennsylvania grand-jury report alleged that, as archbishop of Pittsburgh from 1988 to 2006, he had permitted priests accused of abusing minors to be reassigned or reinstated. He said Thursday that new leadership is needed to help the Washington archdiocese get past the “current confusion, disappointment, and disunity.”

In an ambiguous homily on Tuesday, Francis seemed to suggest that Satan was playing a role in the uncovering of the Church’s sex-abuse scandal. “In these times, it seems like the ‘Great Accuser’ [a biblical name for the devil] has been unchained and has it in for bishops. … He tries to uncover the sins, so they are visible in order to scandalize the people,” he said.

Some Catholics I spoke to speculated Francis may have been alluding to Viganò’s letter, which demanded the pope’s resignation. Either way, it struck some as a discordant remark at a moment when many are seeking contrition and humility from the Vatican.

The pope’s favorability has been plummeting in the U.S., among both Catholics and the general public. A year and a half ago, he enjoyed a 83 percent favorability rating among U.S. Catholics, but that’s dropped to 63 percent, according to CNN.

Hasson, who drafted a public letter—now signed by 45,000 women—demanding answers from the pope about what he knew and when, said that although she and the other signatories love the Church, they are angry that the pope has not been more forthcoming and transparent. “The Church itself needs to get serious about spiritual integrity,” she said. “People are now praying for the Church.”

If one wants the Church to reform itself and belatedly remove bishops and cardinals who turned a blind eye to sexual abuse, the best way to do so is to (i) have parishioners cease financial support to the Church and let pastors and bishops know why the funds are being cut off, and (ii) better yet, walk away from the Church and, again, let it be known why you are leaving.  Throughout history, only a lose of membership combined with a precipitous drop in financial support have forced the Church to change.  These forces need to be brought to bear again.
Posted by Michael-in-Norfolk at Wednesday, September 19, 2018

The scandals will keep rolling in. The Catholic church has covered abuse for decades and decades. But you are right. If parishioners grab their wallet and go somewhere else, it may ring a bell.