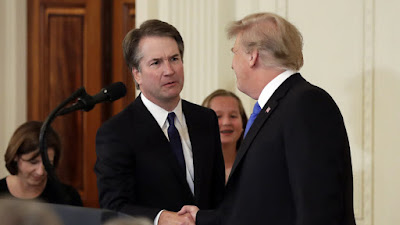 As regular readers know, I hold most evangelical Christians in very low regard and, in my view, justifiably so.  They have come to represent the antithesis of the Gospel message and are best defined by hatred of others, hypocrisy, lies and greed.  Thus, it is a pleasant surprise to find evangelicals who are condemning the Trump/Pence agenda and, in particular, arguing that evangelicals should oppose the nomination of Brett Kavanaugh.   Here is a letter to the editor in the New York Times authored by a pastor (sadly, most evangelicals will ignore the message):

Not all evangelicals support the nomination of Judge Brett M. Kavanaugh to the Supreme Court. His nomination is just the latest effort by the Trump administration to suppress the common good in favor of an immoral agenda. This was true even before the credible sexual assault allegations came to light.

For quite some time evangelicals have walked in lock step with the Republican Party, but the time has come for many of us to place values over party. We must let our faith guide us toward public servants who govern for the good of all people. Judge Kavanaugh opposes the Affordable Care Act, which has brought health care to the sick and vulnerable, and would gut the rights of immigrants in a country that was built by them. Now he faces twin allegations: an egregious act of violence toward a young woman, and lying about it.

As followers of Jesus, it should be plain to evangelicals that this man’s beliefs are not aligned with ours. Evangelicals should let Jesus’ teachings, not a misguided association with the Republican agenda, inform our views and our votes.

Posted by Michael-in-Norfolk at Saturday, September 22, 2018