Kavanaugh’s Accuser is Credible. Will it Matter? 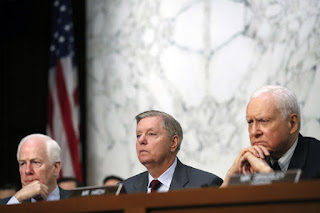 When the tape of Donald Trump with Billy Bush hit the airwaves, Trump dismissed it all as "locker room talk" and waved off the reality that he is a serial molester of more than a dozen and a half women who have called him out.  Now, we have Brett Kavanaugh - did Trump select him not only for his views that make a occupant of the White House a near king or also because of his anti-women views? - who, if his accuser is to be believed, views sexual assault as an instance of "boys will be boys."  More frighteningly, so do almost a dozen male Republican members of the U.S. Senate.  Sadly, it is all part and parcel of the hyper "macho" mentality of far too many straight males who feel that abusive behavior towards women - and gays - somehow proves their masculinity.  Columns in both the New York Times and the Washington Post (naturally, authored by women) look at this pathetic state of affairs and the toxicity of Trump/Kavanaugh masculinity and Republican enabling of the reprehensible.  First, excerpts from the Times piece:

Obviously, I believe Christine Blasey Ford, the psychology professor who says that Brett Kavanaugh sexually assaulted her in high school while his friend Mark Judge watched and, at moments, egged him on. I believe her when she says that Kavanaugh, who she says was drunk, held her down, covered her mouth when she tried to scream, and ground against her while attempting to pull her clothes off. I believe her when she says this incident haunted her all her life.

There’s rarely hard evidence in a case like this, but Blasey — the surname she prefers to use publicly — has done everything possible to substantiate her claim. Speaking to The Washington Post, she produced notes from a therapist she saw in 2012, whom she’d told about being attacked by students “from an elitist boys’ school” who grew up to become “high-ranking members of society in Washington.” According to her husband, that year she identified Kavanaugh to him by name. When Kavanaugh appeared on a shortlist of potential Supreme Court picks — but before his nomination had been announced — Blasey contacted both The Post and her member of Congress, Anna G. Eshoo of California. By all indications, she wanted to head his nomination off without being forced into the spotlight.

Blasey passed a polygraph administered by a former F.B.I. agent. The utility of polygraphs is dubious, but her willingness to take one is evidence of her sincerity. According to Axios, some Republicans wanted to call on Blasey to testify publicly, assuming she’d decline. But on Monday morning, Blasey’s lawyer, Debra Katz, said that her client is willing to appear before Congress.

Kavanaugh denies the allegation unequivocally; on Monday he said he’s willing to rebut it before the Senate Judiciary Committee. (Judge, who wrote a memoir of his teenage alcoholism, has veered between denying the incident and saying he doesn’t recall it.) But it’s a sign of how credible Blasey seems that, since this story broke, much of the public debate has been less about whether her accusations are true than whether they are relevant.

Some conservatives — though not just conservatives — insist that it is unfair to judge a middle-aged man for things he did as a kid. . . . Such arguments would be more convincing if people on the right weren’t so selective in their indulgence. Donald Trump called for the death penalty for the Central Park Five, who were 14 to 16 years old when they were arrested. (They’ve since been proven innocent.) Children are regularly put on sex offender registries, sometimes for their entire lives, for conduct less serious than what Kavanaugh is accused of.

[T]his is no longer just about what Kavanaugh might have done 36 years ago. We need to determine, as best we can, if he’s lying now. . . . . Senators should also demand that Kavanaugh’s old friend Judge, who grew up to become a right-wing writer, testify, though Kavanaugh would surely prefer other character witnesses.

Anyone Trump nominates is going to threaten Roe v. Wade. Kavanaugh would at least make plain the power dynamics behind forced pregnancy. We would lose Roe because a president who boasted of sexual assault, elected against the wishes of the majority of female voters, was able to give a lifetime Supreme Court appointment to an ex-frat boy credibly accused of attempted rape. Kavanaugh, helped by an all-male Republican caucus on the Judiciary Committee, would join Clarence Thomas, whose confirmation hearing helped make the phrase “sexual harassment” a household term. They and three other men would likely vote against the court’s three women. The brute imposition of patriarchy would be undeniable.

If the Kavanaugh nomination goes forward, it’s because Trump and his allies believe that a certain class of men accused of sexual assault deserve impunity. The question now is whether any Republican senators believe otherwise.

“If somebody can be brought down by accusations like this, then you, me, every man certainly should be worried.” — A lawyer close to the White House, speaking to Politico.

If, apparently, a single alleged assault at a single party decades ago is to be frowned upon, then no man is safe, right?   . . . How are we going to fill our offices if this is the new rule? I bet you will say I cannot shout at women as they pass on the street before dragging them to a concrete bunker and then still expect to become governor! What next? I’m supposed to make sure everyone I have sex with is willing? If suddenly, as a country, we decide that violently attempting to assault someone is, like, bad, then that knocks out 98, maybe 99 percent of men, just going off the locker-room talk I’ve heard. . . . You’re telling me I am supposed to encounter dozens, hundreds, thousands of women in my life, some drunk and some sober and some with really good legs and just … not assault any of them?

No. They are an unintelligible something else. . . . . It would just be too terrible if they were people. Then you could not harm them with impunity. Then if you made a mistake (Boys will be boys), you would have harmed a person. Then something else would be at stake in addition to your career, and that cannot be.

If boys cannot be boys, then how can boys be men who rise to the highest offices in the land? If this stops being something you can get away with, then will anyone still be above the law?  Every man should be worried.

Sadly, the column highlights the mindset certainly of Trump and, now it seems far to many Senate Republicans.  It is a mindset that ought to disgust moral, decent people.  I hope women are paying attention and that they correctly direct their wrath at Republicans come the November midterm elections.
Posted by Michael-in-Norfolk at Tuesday, September 18, 2018