"It’s a Gay Problem," and Other Myths From the Catholic Church’s Sexual Abuse Crisis 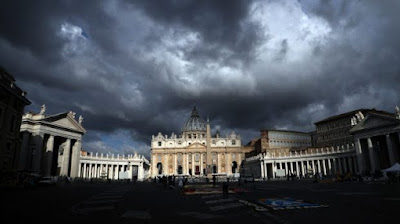 One of the continuing myths put out by right wing elements in the Roman Catholic Church - and which is happily further disseminated by Protestant Christofascists and the right wing media - is that gays in the Catholic priesthood is the reason for the Church's continued sex abuse crisis.  Pushing this myth is far preferable than facing up to the real causes: (i) the Church's bizarre 12th century views on human sexuality and a belief that all sex is essentially dirty and sinful, (ii) the stunted psycho-sexual development of priests brought up in the Church's all male seminary high schools and seminaries, and (iii) the Church hierarchy's preference to protect priests and avoid any exposure of clerical wrongdoing no matter who has to be sacrificed in the process.  A piece in Religious Dispatches at Rewire looks at the these true causes of the once again exploding sex abuse crisis.  Here are highlights that address certain myths put out by right wing elements:


Americans love intrigue. So when Italian Archbishop Carlo Maria Vigano recently issued a public letter alleging a wide-scale cover-up of child sexual abuse—one which reaches all the way to Pope Francis himself—the media and public were sucked right into the conspiracy.

Vigano’s letter opened the doors to the inner workings of the Vatican political and culture war—one culminating with accusations of liberal vs. conservative, gay vs. straight priests, and the power struggles between Popes Francis, Pope Emeritus Benedict, and the Roman Curia.

The problem? None of this has to do with the causes of the sexual abuse of children. By muddying the waters and shifting focus from the crimes and onto politics and the Vatican culture war, Vigano’s letter feeds into old stereotypes that silence victims, minimize abuse, and encourage the continued cover-up.

If we want to address the scope and scale of the problem and put an end to the crisis and those who enable it, we must first work to dispel the myths and stereotypes that aim to silence victims and normalize criminal sexual behavior.

A problem of “homosexual priests”

This is a complicated issue, though it’s not a murky one. It’s important to begin by noting that, according to experts, there is absolutely zero evidence that sexual orientation has anything to do with sexual abuse. Period. In fact, when it comes to adult men who sexually abuse boys, researchers have found that it doesn’t even make sense to label these men as “homosexual,” since they neither possess an adult sexual orientation nor do they tend to show a preference for gender.

When apologists cite “the gay problem” for the ongoing crisis—what Bishop Robert Molino recently called the “homosexual subculture”—their intention is to paint a picture of secretive and “deviant” groups of clergy and a wider Church culture that tolerates them. In reality, the allegedly disproportionately large number of gay priests may be related to the problem, but it isn’t the cause of it.

As Robert Mickens wrote in July, and as others have noted for years, the pathologizing of queer sexualities has driven many men to the priesthood, as the vow of celibacy offers what appears to be a safe haven from negotiating a forbidden path. As a result, although he’s careful to point out that there is nothing about gay men in healthy situations that makes them more apt to sexually abuse others, Mickens argues that some of the abuse is due to the “homophobia that keeps gay men in the closet, bars them from growing up and results in distorted sexuality for many gay priests.”

In other words, the “homosexual subculture” isn’t the problem, though the demonization of queer sexualities could certainly contribute to the failure to develop a healthy adult sexuality.

Ask any victim of clergy sexual abuse—male or female—and they will tell you: child sexual abuse has no place in healthy adult sexuality, gay or straight. When apologists call the crisis a “gay problem,” they succeed in both silencing women victims and forcing a sexual identity onto male victims against their will.

Want the easiest way to silence and shame a male (straight or gay) victim of child rape and sanitize the crime? Call the crime “gay sex.” Make him question whether the abuse was an actual crime at all.

Child sex abuse is a crime of violence where those in positions of power prey upon the weak and vulnerable, using sex as a weapon. Apologists for the Catholic Church will do anything to make sure that this isn’t the focus.

Yes, child sexual abuse is a global problem, inside and outside of the Catholic Church. It happens in homes, schools, camps, sports programs, and any organization that caters to children or helps the vulnerable.

Apologists for the Catholic Church want you to believe that it is “just like any other institution.” It’s not.

Nowhere else in modern society have we seen the continued collusion to cover up decades of sex crimes on the macro or micro level as we see in the Catholic Church. They’ve spent billions of dollars lobbying against victim-friendly legislation; settling with victims; paying defense lawyers to shield abusers and their enablers; hiding and obfuscating evidence of child sexual abuse; shaming and silencing victims; and otherwise deceiving Catholics and the public about the crimes.

Add to that the fact that the church is supposed to have moral authority, and this is a crisis of monstrous proportions.

“It’s a problem of celibacy”

Celibacy is the vow requiring that priests abstain from marriage and adult sexual relations.

Is this suppression of adult sexuality healthy? That’s up for debate. In fact, former priest, psychotherapist and expert on priestly celibacy A.W. Richard Sipe concluded after years of research that no more than 50 percent of priests are celibate at any given time.

Labeling victims because of their physical development minimizes and normalizes sexual assault.

Victims of “pedophilia” (children victimized pre-puberty), church defenders say, are different from victims of “ephebophilia,” those abused after puberty but before adulthood. Older victims are considered “less catastrophically damaged” by the church, implying that what happened to them was less abhorrent and caused less pain.

But let’s get down to the truth: Whether a 15-year-old or an 8-year-old is sexually abused, they are both victims of a horrific crime.

Sanitizing the crime and minimizing victims by saying their abuse “wasn’t as bad” because one particular victim is more physically developed than another—even though two victims may be the exact same age and emotional maturity—is reprehensible.

“The church and Pope Francis are too liberal”

A victim of child sexual abuse has no political leanings. Nor does a predator. Predators seek “easy targets”: at risk children who may lack family structure, self-esteem, or have other disadvantages that a predator can exploit.

Child sexual abuse and cover-up flourished in the Catholic Church during conservative papacies, just as it is continuing now. I’ve worked with victims pre-and post-Vatican II and their stories are similar.

The cover-up has nothing to do with politics. It’s about saving face, protecting priestly friends, and saving the Church from scandal. The political leanings of the pope or the predator have nothing to do with it. As John Gehring recently noted on Religion and Politics, “a top official from the Vatican’s secretary of state office acknowledged receiving allegations about [former Archbishop] McCarrick’s behavior with seminarians as far back as 2000, during the papacy of John Paul II.”

The only way we will be able to expose predators and those who covered for them is to maintain razor-sharp focus on the victims and to stop the crimes, not propagate myths that enable more abuse. It is the victims who empowered the Pennsylvania Grand Jury Report. And those same victims are the ones who have refused to give up the fight for justice, in spite of insurmountable odds.

In just the past week the attorneys general from at least a half dozen states have vowed to investigate the Church, and, according to the New York Times, “Pope Francis has summoned bishops from around the world to Rome for an unprecedented meeting focused on protecting minors.”

It’s a good start. In addition, despite the cries of apologists, we must continue to demand robust laws that expose predators and hold the Church accountable for the cover-up and encourage law enforcement to do everything possible to ensure that this cycle of abuse is completely eradicated and wrongdoers punished.

Posted by Michael-in-Norfolk at Thursday, September 20, 2018

I fixed the link to the article.