Are We Witnessing the Beginning of Trump’s End? 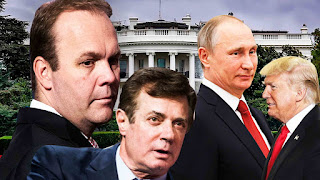 I make no effort to hide the utter contempt that I hold for the current occupant of the White House.  Without a doubt, he is the most foul and toxic individual to every occupy that august residence.  In my view, the man is devoid of any redeeming qualities whatsoever and, unless one is a Christofascist extremist, white supremacist or white nationalist, I truly do not comprehend how the less than 28% of registered voters who put him in office can claim any kind of moral high ground at all.  He is one of the worse things to happen to America in my life time and is the epitome of what I would want my grandchildren not to be; selfish, vulgar, intellectually lazy, a bully, and speaks on an elementary school level.  And then there is his rank dishonesty which is rivaled only by the dishonesty of "professional Christians" like Tony Perkins, Franklin Graham and Jerry Falwell, Jr. Like these modern day Pharisees, if Trump's lips are moving, it is most likely he is lying.  I say all of this as a former Republican who once respected Christianity before the Christofascists and the Catholic Church sex abuse scandal showed that a majority of its leaders and followers are frauds.  I am not alone in this negative assessment.  In a column in New York Magazine, Andrew Sullivan lays out the case against Trump and what, if the nation is lucky, will be the beginning of the end of the man.  Here are column highlights:

[T]his last week suggests to me is that there is a quickening in the crisis of the Trump presidency. I’m not sure where it will lead, but something is stirring.

Everything we’re seeing from the special counsel, Robert Mueller, suggests the growing possibility, at the very least, that Trump is implicated in a conspiracy with a foreign power to defraud the United States of America (that’s a better way of describing it than “collusion”). We can intuit this because we now know that the Trump campaign official George Papadopoulos knew by April 2016 that Russia had thousands of allegedly incriminating emails from Hillary Clinton, and planned to release them. It’s extremely hard to believe Papadopoulos didn’t share this information with his confreres on the Trump campaign. Why on earth would he not?

Trump then went out of his way repeatedly in the campaign to draw the media’s attention to the hacked emails, kept denying they were definitively the result of Russian interference, then publicly urged Russia, on national television, to release them. That summer, Donald Trump Jr. was thrilled to meet with Kremlin-connected Russians who might provide more information about the hacked emails, hoping that they could be released later in the campaign. He subsequently lied about this in a statement reportedly co-written by the president and Hope Hicks. Then there’s Mueller’s successful bid to get Rick Gates, Paul Manafort’s right-hand man, to cooperate with the ongoing case against Trump’s former campaign manager. Gates knows everything about that sleazeball’s money-raking over the years, and his enmeshment with some of the most repellent tyrants on the planet (not including Trump). His testimony could be devastating. All of this lends considerably more credibility to the notion that Trump may have effectively committed treason during his campaign, and that Mueller may hit pay dirt. I have to say I’ve become much less skeptical of this idea as time has passed and the evidence has accumulated. It reached a tipping point for me last week.Then there’s the New York Times story this week detailing Jared Kushner’s obvious conflict of interest in meeting with subsequent lenders to his company in his White House capacity. It’s one of the more damning exposés of a White House official that I’ve ever read. It reveals the character of the man (he’s just like his dad), and the removal of this gilded, mute grifter’s top security clearance is a sign that some small constraints on the unprecedented corruption in Trump’s orbit are beginning to emerge.The swift departure of Hope Hicks after Trump berated her for telling the truth to the House Intelligence Committee — he reportedly asked her how she could “be so stupid” — is another sign of unraveling. (If true, by the way, then Trump’s interference with an individual’s possible future testimony under oath, is also, strictly speaking, a crime.)

At the same time, a remarkable [and totally unlikely] hero is emerging in the fight for the norms of liberal democracy: Jefferson Beauregard Sessions III. He has steadfastly refused to act as Trump’s personal point man at the Justice Department . . . . Money quote: “As long as I am the attorney general, I will continue to discharge my duties with integrity and honor, and this department will continue to do its work in a fair and impartial manner according to the law and Constitution.” Translation: Fuck off, Mr, President. Having a nice public dinner with Deputy Attorney General Rod Rosenstein Wednesday night was the cherry on top of this DOJ sundae.

Trump is flailing on policy matters, too. The reckless tax cut, we now know, has benefited shareholders far, far more than the middle or working class, the mounting debt is putting pressure on interest rates, and a sudden spree of tariffs is a further unknowable disruption. On the opioid crisis, Trump’s primary focus, as he revealed in his drop-by meeting at the White House yesterday, appears to be a Duterte-like assassination squad for drug-dealers.

Then there was the staggering open meeting this week with senators on gun-control proposals. Trump revealed that he’s an authoritarian liberal on the issue, rather than a constitutional conservative, which is why Ben Shapiro, among many others on the right, regarded the performance as “a complete and utter disgrace.” (I’ve rarely seen Dianne Feinstein more chipper.) But Trump’s infatuation with gun control makes perfect sense to me, given what we know of him. Have we ever seen him decline “control” of anything? So why not guns? His blithe dismissal of “due process” in backing the government’s right to enter someone’s home and confiscate their weapons is also completely consistent with his contempt for liberal democratic norms in every other area.

He’s violated some core GOP beliefs on guns and immigration. It’s telling, it seems to me, that Drudge buried this news and Sean Hannity managed to cover the session without ever mentioning Trump’s extraordinary gaffe. Drudge and Hannity are, for me, the best indicators of when Trump is in trouble. The more they bury news, the more important and dangerous it is for the Trump agenda. And there’s a lot to bury right now: metastasizing scandal, an administration at war with itself, a chief of staff looking wobbly, egregious corruption, and open rhetorical betrayal of the base. It’s not that we haven’t seen all of this before — but it’s the combination of all these in a sudden and accumulating pile that seems more ominous than usual.

Trump’s best bet is that he can gin up another culture-war distraction and that the cult behind him — and the cult’s fear and loathing of the other tribe — will render him immune to the usual political crosswinds. All the evidence reveals that, so far, he would be right. His 85 percent approval rating from Republicans remains and probably will never decline — regardless of anything he does or might do. I suspect that even if there were a tape of him conspiring with Putin himself to tip the 2016 election, Fox would call it fake news, Trump would say it’s not his voice, and the GOP base would side instinctively with their newly beloved Kremlin over the Democrats. But I’ve begun to wonder if there’s a chance that the cultish following may falter as the reality of Trump’s ideological fickleness, managerial incompetence, and boundless corruption begins to seep through. At some point, surely even his supporters will have to say that this is finally enough.

Perhaps Sullivan is too optimistic, but there does seem to be a gathering momentum against Trump.  Should he be forced from office, one can only hope that Pence gets dragged down with him.   As a true Christofascist who thinks god tells him what to do, having Pence in the White House would be a terrifying prospect.
Posted by Michael-in-Norfolk at Saturday, March 03, 2018