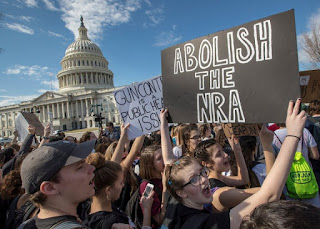 Yesterday was a bit of a perfect storm of the negative kind for the NRA and its political whores within the GOP as (i) Der Trumpenführer seemingly endorsed a Democrat gun control proposal, (ii) Walmart joined Dick's Sporting Goods  in saying that it will raise the age for purchasing firearms to 21, and (iii) new polls show a surge in support for gun control measures. True, Trump may well reverse course once the NRA and/or his GOP handlers chew his ass out.  But the other developments cannot be promising for the NRA and the gun manufacturers for which it is a front organization.  A piece in Politico looks at Walmart's announcement.  Here are excerpts:

Walmart, one of the nation’s leading retailers, announced on Wednesday that it would no longer sell guns and ammunition to those younger than 21.

“In light of recent events, we’ve taken an opportunity to review our policy on firearm sales,” according to a company statement. "Going forward, we are raising the age restriction for purchase of firearms and ammunition to 21 years of age. We will update our processes as quickly as possible to implement this change.”

The announcement came the same day that Dick’s Sporting Goods also announced it would no longer sell guns to anyone under the age of 21.

Unlike Dick’s, however, Walmart has not sold AR-15 or other assault-style rifles since 2015, and it does not sell handguns, except in Alaska. The company also said it does not sell so-called bump stocks, high-capacity magazines or similar accessories.

“We take seriously our obligation to be a responsible seller of firearms and go beyond federal law by requiring customers to pass a background check before purchasing any firearm,” Walmart said in its statement.

The company noted that unlike federal law, which would allow the sale of a firearm if no response to a background check request had been received within three business days, the company prohibited the sale until the request was approved.

I am not typically a fan of Walmart, but kudos to the company for these gun policies.  As for the surging polls showing support for gun control reform, here are highlights from a second piece from Politico:

Support for stricter gun laws has spiked in polls conducted after the fatal South Florida school shooting, hitting its highest level in at least a quarter-century.

Roughly 2 in 3 Americans now say gun control laws should be made more strict in the wake of the murder of 17 people at Marjory Stoneman Douglas High School, according to a number of polls, including a new POLITICO/Morning Consult poll that shows support for stricter gun laws among registered voters at 68 percent, compared with just 25 percent who oppose stricter gun laws.

[T]here appears to be a clear trend in all the post-Parkland, Florida, polling: This time is different. The percentage of Americans who want more restrictive gun laws is greater now than after any other recent shooting.

Morning Consult polling goes back only two years, but support for stricter gun laws was at 58 percent following the 2016 Pulse nightclub shooting that killed 49 people, 64 percent following the 2017 mass shooting that resulted in 58 deaths at a country-music festival in Las Vegas and 60 percent last November, after a shooter killed 26 people inside a church in Sutherland Springs, Texas.

Much of that increased support comes from Republicans, according to Kyle Dropp, Morning Consult’s co-founder and chief research officer.

"Republican support for tougher gun laws is at its highest point since Morning Consult and POLITICO began tracking the issue," said Dropp. "In this week's poll, 53 percent of Republicans indicated they supported stricter gun laws, compared to 37 percent [of Republicans] who said the same following the Pulse nightclub shooting in June 2016.”

A CNN poll released this week recorded support for stricter gun control laws at 69 percent — the highest mark since 1993. It’s up from just 52 percent last October, shortly after the Las Vegas shooting. Nearly half of Republicans, 49 percent, support stricter gun laws, up from 30 percent in October.

Raising the age limit on gun purchasers is also widely popular. Eighty-two percent think the age limit should be 21 to purchase an assault-style weapon, and 81 percent support requiring purchasers of all firearms to be 21.

More than 3 in 4 voters, 78 percent, want to create a national database with information about each gun sale. The same percentage support a three-day waiting period for all gun purchases, and 77 percent support a ban on bump stocks, which President Donald Trump has called a priority for his administration.