Progressives Are Energized, Now They Must Turn Out to Vote 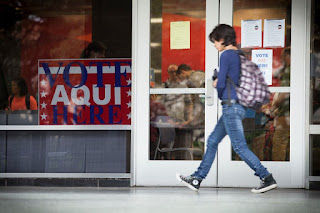 If nothing else, Donald Trump has energized progressives and decent people - which I am sorry, does not include evangelical Christians - appalled by Trump's corruption, vulgarity and endless dishonesty.  Add to that the Trump/Pence regime's attack on the rule of law and political and societal norms and there's plenty to be energized against.  The one problem, however, is that progressives have a bad track record in getting themselves to the polls on election day. This is especially true with younger voters who have the most to lose long term under GOP policies.  The same is true for minority voters facing a GOP which is increasingly openly racist and discriminatory.  The Virginia 2017 elections underscored that when progressives do mobilize, progressives can win big.  Danica Roem's defeat of the foul Bob Marshall by roughly 10 points is an exclamation point to this reality.  A piece in the New York Times looks at progressives' need to mobilize their turn out effort and to make sure young voters and minorities turn out on election day this coming November.  Indeed, they need to turn out in every election cycle and vote out Republicans be they on city councils and school boards or running for Congress.  Here are article highlights:

The Trump presidency [nightmare] has brought a political awakening for American progressives. It began even before he took office, with the organizing for the Women’s March. Then came the citizen activists who protested at airports and later helped save health insurance for millions of people. Now high school students are trying to transform the gun debate.

In a new article in the journal Democracy, two academic researchers tell the story of the energized progressive movement. The leaders are most often suburban women alarmed by President Trump’s assaults on decency and the rule of law. The movement is more bottom-up than top-down, more face-to-face than virtual, more Middle American than coastal. It does not always identify itself with the Democratic Party, even if it supports almost exclusively Democrats.

It spans “the broad ideological range from center to left” and (despite media coverage to the contrary, they argue) spends little time on Bernie-versus-Hillary fights. Above all, it is trying to elect progressives, including to oft-ignored local offices — and it’s now focused on the 2018 midterms.

That’s smart. Elections are precisely what progressives should be emphasizing. Protests can have an effect, as happened with Obamacare repeal and is happening on guns. But major progress on almost every issue — climate change, immigration, middle-class living standards and gun deaths — depends on electing people who want to make progress. Trump and the current leaders of Congress plainly do not.

Political movements have two main ways to win elections: persuasion and turnout. On persuasion, I think progressives’ best hope is an economic message that focuses the white working class on the working-class part of its identity, rather than the white part. But today I want to concentrate on turnout, because it has an even greater potential to change American politics.

Voter turnout is the biggest opportunity — and biggest challenge — for the new progressive movement. The problem is easy enough to describe: Progressives don’t vote as often as conservatives do.

Americans under age 30, for example, lean notably left. They are socially liberal, worried about climate change and in favor of higher taxes on the rich. But most of them don’t vote, especially outside of presidential elections. In the 2014 midterms — when Republicans took control of the Senate and held the House — only one of every six citizens between 18 and 29 voted. One in six! The same year, more than half of people aged 60 or older voted.

The pattern also holds among Latinos and Asian-Americans. They’re mostly liberal and vote at lower rates than whites.

The new progressive movement has made some early headway on turnout. In both the recent Virginia and Alabama elections, national groups ran huge get-of-the-vote operations, with vital help from the grass roots. The results were impressive. Turnout was surprisingly high, including among younger voters, and Democrats won some shocking upsets. The same has happened elsewhere in special elections for state legislature seats.

But lifting turnout in a one-off election, where activists can focus their energies, is easier than doing so in a nationwide midterm.

The crucial point is that the Trump presidency has created an opportunity to jump-start progress — an opportunity that doesn’t come along often. People who don’t normally pay much attention to politics are doing so. For some, it could become habit. So could voting.

The entire progressive movement — from the top of the Democratic Party to the new neighborhood groups — should be thinking about how to lift turnout. . . . . They should be spending time and money to register voters. They should be asking progressive entrepreneurs how the iPhone, Alexa, social media, podcasts and yet-to-be-built apps can inspire (and nag) people to vote. They should be ruthlessly evaluating what works and what does not.

The mechanics of voter turnout aren’t exciting. But the results can be: Fewer gun deaths. Less climate damage. Less inequality. Higher living standards. And a government that better reflects the views of all its citizens.

Bad things happen when good people fail to act.  Voting is easy and costs nothing.  Nowadays, voting is a way to actively confront and defeat evil.  Each of us needs to work from now through November to turn out progressive friends and family members and get the to the polls when it counts.

Posted by Michael-in-Norfolk at Tuesday, February 27, 2018

To a politician, people who don't vote both literally and figuratively don't count.