Have Trump and GOP Caused the Forces of Decency to Awaken? 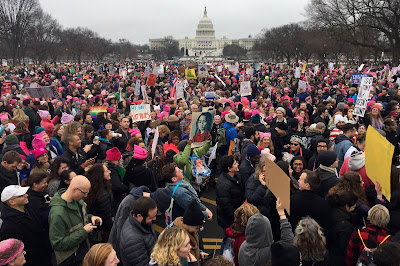 Donald Trump is perhaps the most vile and corrupt individual to ever occupy the White House.  Meanwhile, the Republican Party has become the party of constant lies which may have finally over played its hand with the Trump tax cut that voters are discovering - albeit it a bit belatedly - was a scam and a massive give away to the very wealthy and ruthless large corporation.  Seemingly, other than the 36-37% of the population made up of rabid Christian extremists, gun fanatics and white supremacists who continue to support Trump as their "dear leader," the rest of the country is increasingly recognizing Trump and the GOP for what they are: corrupt and bad people.  The NRA's near full ownership of Republicans in the wake of the Parkland, Florida mass shooting has perhaps been the straw that will break the GOP's back, especially if it cause young anti-GOP voters to surge to the polls come November.  What's powering the surge of opposition to Trump and the GOP?  A column in the New York Times argues that it is people's realization that many share their revulsion toward Trump and Republicans and this is causing them to mobilize to push for a return of decency and some semblance of honesty and an end to politicians bought by special interest such as the NRA.  Here are column highlights:


A funny thing is happening on the American scene: a powerful upwelling of decency. Suddenly, it seems as if the worst lack all conviction, while the best are filled with a passionate intensity. We don’t yet know whether this will translate into political change. But we may be in the midst of a transformative moment.

You can see the abrupt turn toward decency in the rise of the #MeToo movement; . . . You can see it in the reactions to the Parkland school massacre. For now, at least, the usual reaction to mass killings — a day or two of headlines, then a sort of collective shrug by the political class and a return to its normal obeisance to the gun lobby — isn’t playing out. Instead, the story is staying at the top of the news, and associating with the N.R.A. is starting to look like the political and business poison it should have been all along.

And I’d argue that you can see it at the ballot box, where hard-right politicians in usually reliable Republican districts keep being defeated thanks to surging activism by ordinary citizens.

This isn’t what anyone, certainly not the political commentariat, expected.

After the 2016 election many in the news media seemed all too ready to assume that Trumpism represented the real America, even though Hillary Clinton had won the popular vote and — Russian intervention and the Comey letter aside — would surely have won the electoral vote, too, but for the Big Sneer, the derisive tone adopted by countless reporters and pundits. There have been hundreds if not thousands of stories about grizzled Trump supporters sitting in diners, purportedly showing the out-of-touchness of our cultural elite.

[T]hose pink pussy hats [at the Women's March] may have represented the beginning of real social and political change.

Political scientists have a term and a theory for what we’re seeing on #MeToo, guns and perhaps more: “regime change cascades.” . . . . When people see the status quo as immovable, they tend to be passive even if they are themselves dissatisfied. . . . . but once they see others visibly taking a stand, they both gain more confidence in their dissent and become more willing to act on it — and by their actions they may induce the same response in others, causing a kind of chain reaction.

Such cascades explain how huge political upheavals can quickly emerge, seemingly out of nowhere.

[N]othing says that such cascades have to be positive either in their motivations or in their results. The period 2016-17 clearly represented a sort of Alt-Right Spring — springtime for fascists? — in which white supremacists and anti-Semites were emboldened not just by Donald Trump’s election but by the evidence that there were more like-minded people than anyone realized, both in the U.S. and Europe

I nevertheless find the surge of indignation now building in America hugely encouraging. And yes, I think it’s all one surge. The #MeToo movement, the refusal to shrug off the Parkland massacre, the new political activism of outraged citizens (many of them women) all stem from a common perception: namely, that it’s not just about ideology, but that far too much power rests in the hands of men who are simply bad people. . . . Exhibit A for that proposition is, of course, the tweeter in chief himself.

At the same time, what strikes me about the reaction to this growing backlash is not just its vileness, but its lameness.  Trump’s response to Parkland — let’s arm teachers! — wasn’t just stupid, it was cowardly, an attempt to duck the issue, and I think many people realized that.

Or consider the growing wildness of speeches by right-wing luminaries like Wayne LaPierre of the N.R.A. They’ve pretty much given up on making any substantive case for their ideas in favor of rants about socialists trying to take away your freedom. It’s scary stuff, but it’s also kind of whiny; it’s what people sound like when they know they’re losing the argument.

Again, there’s no guarantee that the forces of decency will win. In particular, the U.S. electoral system is in effect rigged in favor of Republicans, so Democrats will need to win the popular vote by something like seven percentage points to take the House. But we’re seeing a real uprising here, and there’s every reason to hope that change is coming.

Personally, I have been surprised to discover some who I never viewed as "liberal" or "progressive" are disgusted by what they are seeing flow daily from the White House and the GOP controlled Congress.  Here in Virginia, the last election cycle underscored that if people get angry and mobilize, they can over come the toxicity of the right and vote the bad guys out of office.  This resolve and motivation needs to go nationwide in 2018 and the GOP needs to become the minority party.  Hand in hand with this is a growing knowledge - which has yet to dawn on much of the media - that evangelical Christians are numbered among the bad guys. They have supported a totally immoral regime and deserve no deference or respect.

Posted by Michael-in-Norfolk at Wednesday, February 28, 2018