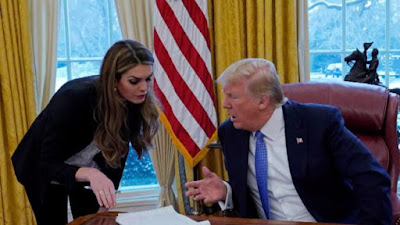 Only a day after she admitted telling "white lies" for Donald Trump while testifying before the House Intelligence Committee, Hope Hicks - Trump's long time associate and until yesterday White House Communications Director - is resigning her position.  It goes without saying that there is lots of speculation over what the "backstory" behind her resignation might be.  Did Trump want her out?  Did her attorneys tell her it was time to bail?  Was the cost of lawyering up in the face of the Russiagate investigation becoming too much? Does she know where the proverbial bodies are buried?  We do know (i) that she sent a memo about making sure damning emails about Russian communications with Trump, Jr., not getting out, and (ii) she played a role in preparing the false statement drafted on Air Force One by Der  Trumpenführer about the Trump Tower meeting with apparent Russian agents.  A column in the Washington Post looks at the swirling questions.  Here are highlights:

We were just speculating as to why President Trump seemed particularly agitated over the past 24 hours, reaffirming his reelection plans and then lashing out at his attorney general. Now we learn (coincidence?) from a New York Times report that longtime confidante Hope Hicks is leaving the White House. When one leaves to pursue other opportunities, but doesn’t identify any, chances are there is a backstory to the departure.

The timing is curious, to say the least. She told the House Intelligence Committee on Tuesday that she’s told “white lies,” but not on anything “substantive” for Trump. Whether that remark or something else she said in the presence of Trump’s favorite errand boy, Rep. Devin Nunes (R-Calif.), may have triggered her departure is unknown, nor is it clear on what topics she declined to provide answers. Her resignation also comes the day after Jared Kushner’s day from hell,. . . . four foreign government have spoken about using his financial interests (recall, he’s heavily in debt) to gain influence with the administration. (Might this have been an effort to draw attention away from that fiasco?)

It is hard to believe that Trump, who’s depended on her assistance for years — well before the 2016 campaign — wanted her to go. . . . . but chances are it was she who wanted to leave, not anyone in the White House who wanted her to go. Now, the reason for her decision, if it was her choice, may be innocuous. It’s exhausting working in the White House, especially this one.

Will her departure matter? On a political level, likely not.  . . . Her departure, however, may be bad news for Trump from a legal standpoint. She is a direct witness to much of the day-to-day goings on in the White House. She was present on Air Force One for a critical episode in the Russia affair. She reportedly was involved in the drafting of a memo that did not accurately recount the reason for the Trump Tower meeting in June 2016. Beyond that we do not know what more she has heard or has knowledge of regarding either “collusion” or Trump’s repeated attempts to throw the Russian investigation off track.

[S]he has already spoken to special counsel Robert S. Mueller III, . . . She also, and this is key, worked with Trump in his real estate business — in fact she knew very little about politics before the 2016 campaign. As Mueller begins to delve deeper and deeper into Trump’s financial affairs and his connection to Russian money, she may have an unusual inside account as to how he operated and the people with whom he interacted.