Another LGBT Rights Victory at the U. S. Supreme Court 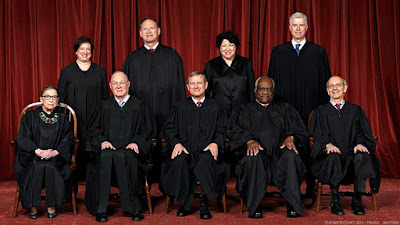 Republicans in state legislatures across the country continue to prostitute themselves to Christofascists and push anti-gay legislation that would roll back rights flowing from same sex marriage.  No issue seems too trifling to push as part of the agenda to make LGBT citizens second class citizens under the nation's laws.  Texas Republicans and Republicans in other states have sought to strip same sex spouses of employee benefits afforded to heterosexual couples and Georgia Republicans are pushing a bill that would allow discrimination against same sex adopting parents.  In Arizona one of the slights aimed at same sex couples was to bar the non-biological parent from being named as a parent on birth certificates.  Now, the U.S. Supreme Court has blocked the anti-gay effort in Arizona by declining to review the Arizona Supreme Court’s ruling that recognized a woman as the legal parent of a child she and her same-sex spouse conceived through assisted reproduction.  A piece in The Advocate looks at this victory for LGBT Americans.  Here are highlights:

The U.S. Supreme Court today let stand an Arizona decision that recognized a woman as the legal parent of a child she and her same-sex spouse conceived through assisted reproduction.

The high court declined to review the Arizona Supreme Court’s ruling in the case, issued last September, reports the National Center for Lesbian Rights, which along with the firm of Ropes & Gray represented the mother who sought to be recognized as a parent. The Arizona court had ruled, “It would be inconsistent with Obergefell [the U.S. Supreme Court’s marriage equality decision] to conclude that same-sex couples can legally marry but states can then deny them the same benefits of marriage afforded opposite-sex couples.”

The U.S. Supreme Court has twice explained in Obergefell v. Hodges and Pavan v. Smith that the U.S. Constitution requires states to provide the exact same rights to same-sex spouses and different-sex spouses,” said NCLR family law director Catherine Sakimura in a press release. “States across the country should take careful note of this decision. Discrimination against married same-sex couples will not be tolerated.”Last June, the U.S. Supreme Court held in Pavan v. Smith that states had to treat married same-sex couples the same as opposite-sex couples when it came to listing them as parents on birth certificates. The state of Arkansas had claimed that birth certificates can list only biological parents, even though birth certificates for straight couples list a mother’s male spouse even if that man is not the biological father.

Posted by Michael-in-Norfolk at Wednesday, February 28, 2018