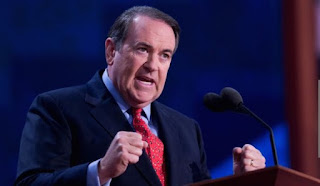 Sarah Huckabee Sanders learned to lie from one of the most proficient liars in the country, her father Mike Huckabee.  But not only is Huckabee a liar, he's a bigot as well, especially when it comes to LGBT individuals.  Like most Christofascists, we seeks to inflict his hideous version of Christianity on all Americans.  In Huckabee's world, only right wing Christian extremists have rights under the First Amendment of the U.S. Constitution.  Thankfully, the Country Music Association had enough of Huckabee's bigotry and he was booted from the board of its charitable arm, the CMA Foundation.  One can only hope that more and more organizations will see those like Huckabee for what they are: undesirable and and anti-American principles.  The Advocate looks at Huckabee's welcomed ejection from the CMA Foundation board.  Here are highlights:

Mike Huckabee’s homophobia has struck a sour note with the country music industry.

After outcry against his presence on the board of directors of the CMA Foundation — the charitable arm of the Country Music Association — the former Arkansas governor and failed presidential candidate resigned from the board today, one day after his election, reports Nashville newspaper The Tennessean.

“The announcement follows pointed criticism from members of the country music industry, as well as fans — much of it stemming from Huckabee's stance on LGBT issues,” the paper reports.

Among other anti-LGBT stances, Huckabee is a longtime opponent of marriage equality and has made offensive jokes about transgender people. He has likened marriage equality to U.S. Supreme Court’s infamous 1856 Dred Scott decision upholding slavery, and he once characterized gender-confirmation surgeries as strictly cosmetic, like implants for a woman who wants larger breasts.

He also opposes gun control and abortion rights, and he recently said his daughter, White House press secretary Sarah Huckabee Sanders, is a victim of feminists who are seeking to discredit her.

While the country music industry may be one of the more conservative portions of the entertainment world, there are numerous country music executives, artists, and fans who are LGBT or allies, and they were quick to object to Huckabee’s election to the board of the foundation, which is “devoted to growing and supporting music education programs across the country,” according to The Tennessean.

“Huckabee speaks of the sort of things that would suggest my family is morally beneath his and uses language that has a profoundly negative impact upon young people all across this country,” said Jason Owen, a married gay father who is co-president of Monument Records and owner of Sandbox Entertainment, in an email to CMA officials, The Tennessean reports. “Not to mention how harmful and damaging his deep involvement with the [National Rifle Association] is. What a shameful choice.”

Whitney Pastorek, who manages Sugarland singer Kristian Bush, also objected to Huckabee’s presence on the board. “What a terrible disappointment to see [the CMA Foundation’s] mission clouded by the decision to align with someone who so frequently engages in the language of racism, sexism, and bigotry,” she told CMA executives via email.

Huckabee, a former Fox News Channel host, now has a talk show on the Trinity Broadcasting Network, an evangelical Christian outlet. . . . He was not immediately available for comment on his resignation, The Tennessean reports.

No doubt Huckabee will claim that his a victim of "anti-Christian bigotry" when in fact he's the one who is the bigot.  Kudos to CMA for giving im the boot.